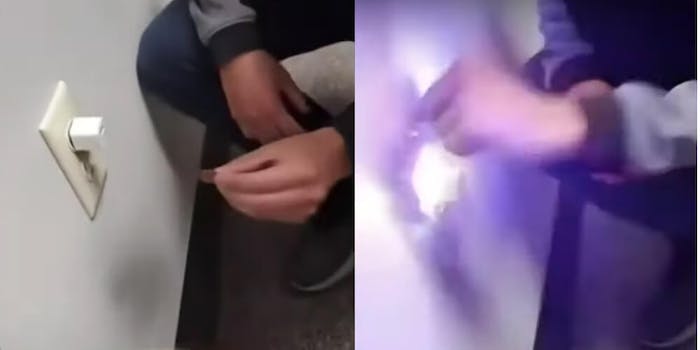 The teens started a fire at their high school.

There’s a TikTok challenge where participants are attempting to short circuit electrical sockets by inserting pennies in between plugged-in chargers and outlets. Two teens are facing attempted arson charges for setting their school on fire while trying to replicate it on Tuesday.

According to the New York Post, two Massachusetts students at Plymouth North High School were charged after attempting the stunt not just one but two times. Apparently, a similar incident went unreported earlier this week, and the 15-year-olds are taking the heat for both. Luckily, no one was hurt, and the damage to the school was very minimal.

“This action caused minor damage to the building,” Plymouth Police Chief Michael Botieri told the Post. “However, this behavior is very dangerous and has potential to cause serious damage to property as well as serious injury to students, staff or visitors.”

Botieri also added a stern warning to anyone who may be thinking about participating in the challenge.

“This type of behavior will not be tolerated by this department and anyone involved will be prosecuted to the full extent of the law,” Botieri’s statement reportedly read.

The state’s fire marshal, Peter Ostroskey, recently issued a safety warning regarding the challenge, saying that touching the prongs of a plugged-in charger with a coin could cause “sparks, electrical system damage, and in some cases fire.”

Both teens have been charged with attempted arson and malicious damage to property under $1,200.