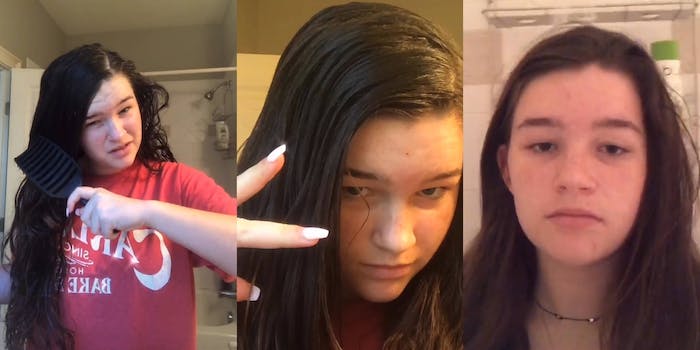 Paige Gozon embraced her non-washed hair as a lifestyle.

The reign of TikTok‘s “greasy hair girl” has ended.

Paige Gozon, a 16-year-old from North Carolina, ran with the nickname after a December 2019 “greasy hair check” that now has more than 7 million views. Gozon runs a brush through her long locks, slick with oil, and in the caption claims it is day 2,892 of not washing her hair.

In an interview with Allure, she says her shampoo-free reign—from January 2012 to January 2020—”originally began as a defiance against my parents.” But as weeks turned into months, Gozon found an identity in it: “After a year, I simply declared it was my lifestyle. I really did embrace it.”

Gozon admits she did regularly rinse her hair and use products to combat the oil, but the comments on her posts show that not everyone embraces the lifestyle. She tells Allure, “It allowed me to talk to close-minded people about something I’m very passionate about,” and Gozon used TikTok to address people’s questions and misconceptions.

On Jan. 14, she washed her hair for the first time in eight years. Gozon said it was because she was heading off to a semester at a new school and “since I’m moving on with my life I better move on with my hair too.”

Over the years, other women have advocated the benefits of forgoing shampoo, ranging from a year to 20 years. But Gozon appears to be doing just fine as a renewed hair-washer.