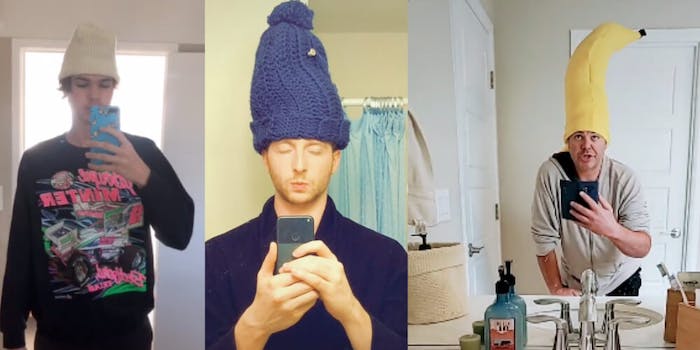 Sneaking snacks into the movie theater to avoid paying ungodly prices for a pack of M&M’s is a timeless tradition. And like everything else, Gen Z is going above and beyond. Many moviegoers throw candy in their purse or pockets, but TikTok users are wearing big hats to sneak candy into the theaters–or joking about it, at least–after one TikTok innovator figured out how to stash Skittles in his beanie.

TikTok user @applecrumbwill posted a video, asking his followers to “please just be honest, if you worked at the movie theater, would you or would you not, check under my hat for Skittles?”

Applecrumbwill, you have given TikTok the relatable content it needs. Other TikTok users were quick to duet his video filming their reactions absolutely losing it over the hat.

Now TikTok users have started using applecrumbwill’s voiceover to show off their own crazy hats potentially used for sneaking candy in. User @stickmanpat showed off his giant blue beanie that’s surely filled to the tip-top with candy.

User @thezeroyoudeserve posted a video in a large banana hat, which is sure to not raise any eyebrows.

And user @alligatorpancake had to stand across the room from his mirror to show off his hat to its full extent.

It’s truly impressive how innovative Gen Z can be when it comes to everyday tasks.