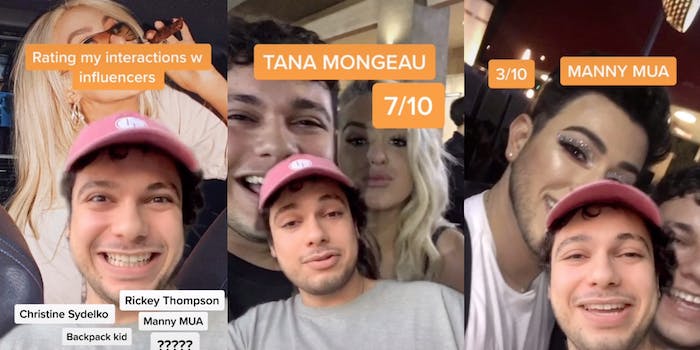 Photographer Adeib El Masri decided to spill some hones-tea in a series of TikToks about his in-person interactions with influencers, including James Charles, Tana Mongeau, Manny MUA, and Nikita Dragun.

In the videos, El Masri gives the online celebs ratings out of 10. The first of the three videos amassed 3.3 million views on the app.

Let’s start off with the good.

Mongeau gets a seven, she was “so nice, so sweet” but never followed El Masri on social media like she said she would. Granted, both their phones died that night, El Masri said.

Comedian and former YouTuber Christine Sydelko got a solid nine.

“So funny. First thing she said was, ‘I’m about to smoke do you wanna smoke with me?’ And I was like, ‘I have asthma but that’s not the point.’ Love her regardless,” El Masri said.

Rickey Thompson got a perfect 10 for being incredibly nice. He and his family took a moment to talk to El Masri when they really didn’t have to.

Manny MUA, a beauty YouTuber, got a three. El Masri said he was rude and made him self-conscious about his appearance.

“He was so rude. He said, ‘Your makeup doesn’t look nice.’ And I wasn’t wearing makeup, so fuck him. Also, he was bitching about a bunch of people,” El Masri said.

Backpack Kid got a zero for asking El Masri if he talked to his manager first before asking for the photo. If you don’t remember, he’s the boy who went viral for his videos doing the floss dance. Laura Lee also got a zero for rolling her eyes because El Masri wanted a photo with Manny and not her.

Gabriel Zamora got a 10 for defending El Masri and telling Lee, “He don’t know you, so what’s the problem?”

Nikita Dragun got a 10 for personality but a four for the interaction. She stood up thinking El Masri wanted a photo with her when he was actually trying to get a picture with Manny. It was awkward.

James Charles got a 10 for niceness but a five for the interaction. He was getting in his Uber when El Masri asked for the photo and said maybe they could take a pic “next time.”

And the whole crew of beauty YouTubers got a “10/10 mean girl moment” because they were “bitching” about Charles behind his back.