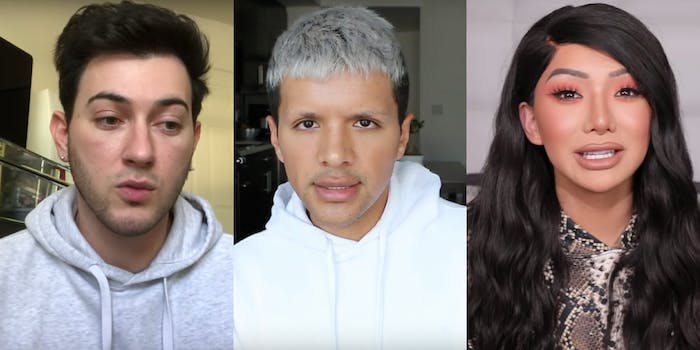 The drama has been escalating all month.

On Sunday, model and beauty YouTuber Laura Lee issued an apology for a racist tweet from 2012. But the drama didn’t end there.

According to Nylon, more makeup and beauty YouTubers have been exposed for their past racist tweets since vlogger Gabriel Zamora tweeted out a photo with Lee and fellow YouTubers Manny MUA and Nikita Dragun earlier this month. The photo, captioned “bitch is bitter because without him we’re doing better,” was a subtweet allegedly aimed at Jeffree Star, a popular makeup artist whose own racist comments and harassment have been called out.

Shane Dawson, a YouTuber who has also apologized for old racist videos, did a five-part series on Star earlier this month, which might have been the igniting factor.

Star’s fans started digging through Lee’s tweets, which brought about her tearful video apology. The others in the photo aren’t getting away unscathed. People pulled up Dragun’s tweets about Black people from 2012. One states, “imagine being black? i could never.” Elsewhere, she joked about pedophilia.

Zamora was also called out for a 2012 tweet in which he used the N-word, and earlier this week he posted a 49-minute video apology. In the video, Zamora claims he has cut ties with Manny MUA, who was criticized for comments about a young girl’s mental health. Manny MUA responded with his own 25-minute “reality check.”

Though Lee, Zamora, Manny, and Dragun have posted apologies, they’ve lost followers, which equals lost revenue and sponsorships. On Wednesday, Lee lost her partnership with Ulta. All of the apology videos follow the same format, and all show the vloggers getting emotional. But the focus is mostly on the drama of interpersonal relationships, not so much remorse for what they did or the bigger issue of racism in the YouTuber community.