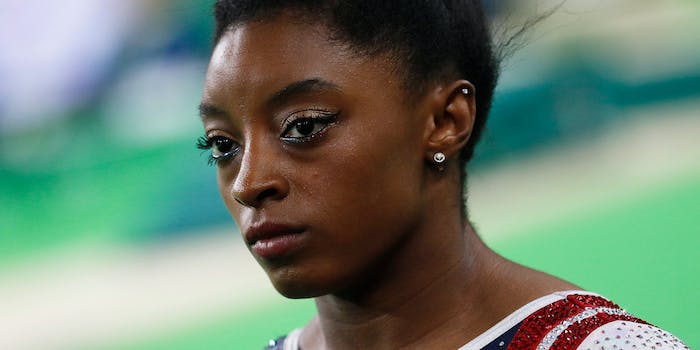 A viral TikTok video shows a cruise-goer’s father starting a prayer circle for the mental health of American gymnastics legend Simone Biles while at the cruise ship pool.

According to ESPN, Biles withdrew “from Thursday’s individual all-around competition at the Tokyo Games to focus on her mental well-being.” Biles and her decision have been a lightning rod for criticism—mostly from conservative men.

A wholesome video featuring a dad starting a prayer circle for Biles while on a cruise has gone viral on TikTok. The video was filmed and posted by @thatbookbabe while on the cruise with her family and already has 942,000 views and over 270,000 likes.

“Protect her, restore her life,” he can be heard saying during the prayer circle. “Relieve the stress; no condemnation at all, Lord. Just take care of her.”

“Mental health king,” the TikToker dubbed her dad in the caption of the video.

Viewers love the moment are calling for @thatbookbabe’s father to be protected “at all costs.” “We stan your dad!” one said.

“I’m not a praying person but when he said ‘just take care of her’ I teared up,” another added.

“MY DAD DOES THE SAME THING BUT FOR BRITNEY,” a third noted

USA Gymnastics on Wednesday addressed Biles’ decision and lauded the gymnast. “We wholeheartedly support Simone’s decision and applaud her bravery in prioritizing her well-being. Her courage shows, yet again, why she is a role model for so many,” it said.

Experts have weighed in noting that the criticism against Biles “is tinged with some misogyny and racism.” “Simon Biles is a Black woman. Osaka identifies as a black woman as well, Japanese and Black. You can think about a lot of it: Where is this anger or expectation that they’re made to perform for us?” Dr. Toni Wilson, assistance psychology professor at the University of Houston, said during an interview.

Biles has also been met with support. She responded to the “outpouring” of love and support in a tweet on Wednesday. She said it has made her realize that she is “more than my accomplishments and gymnastics which I never truly believed before.”

The Daily Dot reached out to @thatbookbabe for comment.