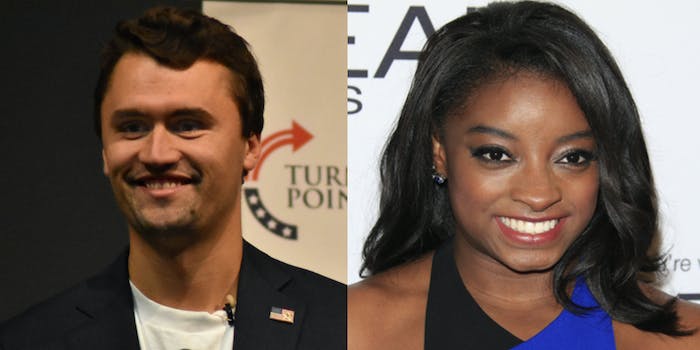 Charlie Kirk is known for a few things: Spreading misinformation about election fraud and COVID-19 via his talk show, his dogmatic support of former President Donald Trump, and his extremely bad opinions about everything from white privilege to climate change.

Simone Biles, on the other hand, is mostly known for one thing: Being the most decorated American gymnast of all time. In less than a decade of competing on the world stage, Biles has earned a collective 30 Olympic and World Championship medals. Her staggering talent has led many to consider her one of the greatest gymnasts of all time.

None of this is enough for Kirk, however, who recently bashed Biles on his aforementioned talk show. Biles made the decision on July 27 to pull out of the 2021 Tokyo Olympics gymnastics team final, citing a “mental issue” that has seen broad support across social media. People are applauding the 24-year-old athlete for speaking out about her mental health and taking care of herself during an extremely stressful time. Kirk, meanwhile, instead called the young gymnast a “selfish sociopath” for choosing her own health over another potential win for Team U.S.A.

Kirk’s comments went viral on social media within hours. Over the course of a brief two-minute clip, Kirk blamed Biles for Russia’s victory in the women’s finals, called her “immature,” and blasted her as a “shame to the country.” He even went so far as to say that America is “raising a generation of weak people like Simone Biles.”

“Don’t show up,” Kirk said near the end of the viral clip. “If you’re not ready for the big time, we’ve got thousands of young female gymnasts that would love to take the place.”

Kirk’s comments spread through the internet like wildfire, quickly backfiring on the far-right media figure. A deluge of furious reactions followed Kirk’s comments, as people around the nation rushed to Biles’ defense.

Referring to Kirk as “peak spoiled mayonnaise on stale white bread,” people dragged the 27-year-old for being the “top 3 worst people alive” all on his own.

Perhaps the best response came from the people who simply let Kirk and Biles’ respective track records speak for themselves.

Pointing out that “Simone Biles is both physically and mentally stronger than Charlie Kirk will ever be,” Biles fans lined up her decorated athletic history against Kirk’s far-less-impressive background.

As mad as everyone is on her behalf, chances are good that Biles is overall unconcerned with what Kirk thinks of her. And if she needs any comfort following his statement, she has hordes of fans, a supportive country at her back, and literal handfuls of gold medals to cry into.

The Daily Dot has reached out to Biles and Kirk.