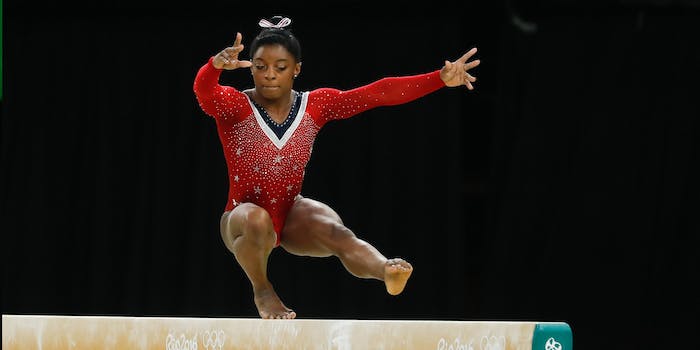 ‘I truly do feel like I have the weight of the world on my shoulders’: Simone Biles pulls out of Olympics gymnastics team final

She is thought to have withdrawn due to a mental health issue.

Simone Biles, perhaps the most high-profile U.S. athlete at the Tokyo Olympics, withdrew today from the women’s gymnastics team finals. The decision was due to a mental health issue, with her coach telling NBC,  “Physically she is fine. But she is done for the night.”

This came after an unusually poor performance in the vault, where she was expected to come first, but made several errors and placed last out of the six competitors. Her withdrawal led to a hasty reshuffle for the U.S. gymnastics team, with Jordan Chiles nailing her beam routine—an event she didn’t expect to compete in before today. Team USA went on to place second in the women’s finals, with Biles being the first person to congratulate the Russian team on their win.

USA Gymnastics posted a statement saying Biles “will be assessed daily to determine medical clearance for future competitions.” In an Instagram post yesterday, she wrote, “I truly do feel like I have the weight of the world on my shoulders at times. I know I brush it off and make it seem like pressure doesn’t affect me but damn sometimes it’s hard hahaha!”

Fans are sharing messages of support on social media, reminding people to remain respectful of Biles’ choice to withdraw. In addition to the high levels of stress surrounding any Olympic athlete, Biles is a once-in-a-generation talent who faces unusual levels of scrutiny from the press. Many people are comparing this situation to Naomi Osaka’s choice to withdraw from the French Open; another young Black woman who faces constant media attention while competing at the top of her game.

Despite an increased level of openness about mental health issues among professional athletes, there’s still a lot of stigma around the topic. Tweeting shortly after Biles withdrew, her former teammate Aly Raisman wrote, “Just a friendly reminder: Olympic athletes are human & they’re doing the best they can. It’s REALLY hard to peak at the right moment & do the routine of your life under such pressure. Really hard.”

Biles was back with her teammates and wearing warmup gear after her announcement.