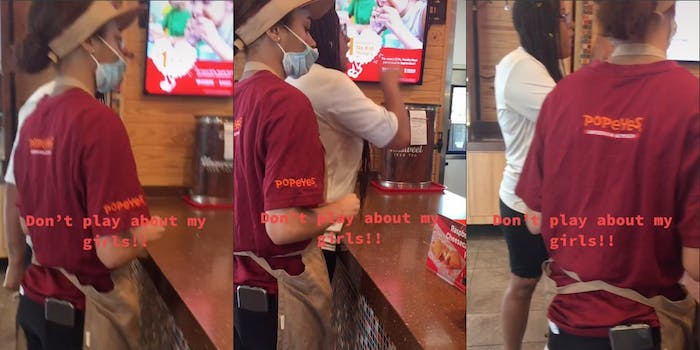 The daughter is an employee and the manager had allegedly snatched her drive-thru headset off of her head.

Most people who’ve heard the term “mama bear” understand that these mothers will do everything to protect their children. One mother proved the saying absolutely right when she popped off on a Popeyes manager who she says disrespected her daughter.

The mother, Latisha Dorsey, posted footage of the incident on TikTok, captioning the video, “Manager getting checked for touching my daughter.. I’m livid!!!” The video has garnered 1.5 million views and over 22,000 comments, with viewers applauding the mama bear.

“Doesn’t matter if she’s 18 months or 18 years, that’s her baby and she’s a mama bear,” one viewer commented.

The video begins with Dorsey beckoning the manager from behind the cashier counter, calmly saying, “Excuse me, let me holla at you.” The manager appears to resist or not come speak with her, which prompts her to raise her voice and insist that he listen.

Then she went off on the manager, who isn’t seen in the video, calling him out for apparently snatching a headset off her daughter’s head, instead of asking her to hand it to him.

The manager denied “snatching” the headset off her daughter’s head, but Dorsey wasn’t taking any excuses. She continued to tell the manager off, then insisted that he apologize to her daughter.

She warned the manager that she wasn’t like her daughter’s father—who she indicates the Popeyes staff has met before—because “he’s nice.”

Dorsey asked the manager what kind of manager he was, to which he had no response.

Viewers pointed out and laughed at the manager’s awkward response to the irate mother.

“He gone cry in the office,” one viewer commented. Another said, “That boy FIDGETING with that headset. The FEAR.”

“Moms had that boy shaking and shivering,” another user laughed.

Still, viewers thought Dorsey was well in her place to go off on him.

“The mom did nothing wrong at all. She stood up for daughter as everyone should do so I give my props to the mom,” one person said. Another commented, “And she’s 1000 percent right don’t put your hands on my child period.”

Dorsey did not respond to the Daily Dot’s request for comment.