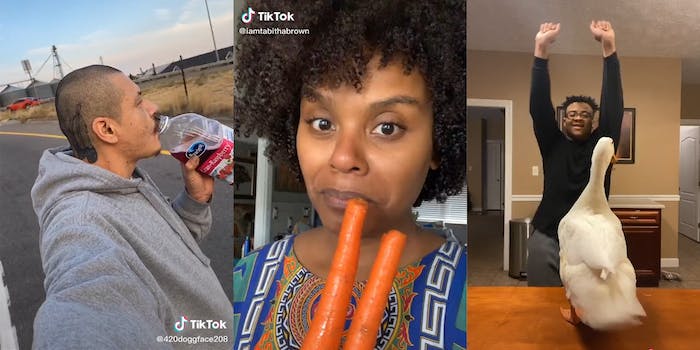 TikTok 2020: The year of food hacks and Doggface

The fate of TikTok is still up in the air, but in 2020 the app became even more popular, as the pandemic forced us onto our phones to alleviate stress and boredom. We’re still bored in the house, and in the house bored.

TikTok just released its year-end lists of most popular videos and creators, and there are some obvious inclusions on the top 10 viral videos list: Nathan Apodaca’s “Dreams” TikTok was the No. 2 most popular video of 2020, just after Bella Poarch’s “M to the B” lip-sync, which received more than 520 million views since August. There are also more niche inclusions, like audio from a decade-old Russian cereal ad (No. 6) and a goose throwing it back (No. 10).

Food hacks got their own category, and it makes sense those videos would be more popular in a year when options were cut back. Tabitha Brown’s carrot bacon tutorial from April is the No. 8 most popular video of the year.

TikTok has also become a platform for discovering how fast food chains make the food you eat, which isn’t always great for the fast food chain. But TikTok’s most popular food videos in 2020 include one on how to make pancake cereal, one on donut cereal, and one on DIY Nutella. And, of course, whipped coffee dominated the early part of the year.

This signals that we were looking for comfort food this year, but also might have been smoking a little more weed.