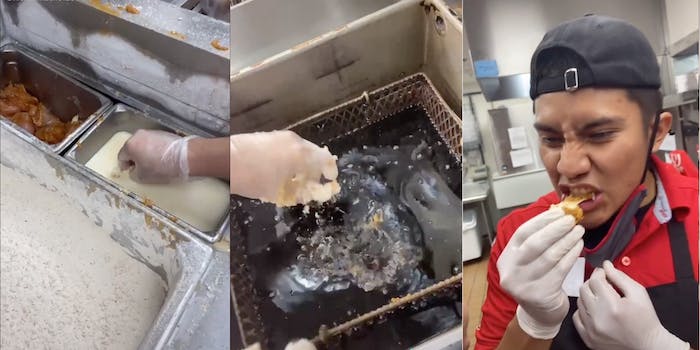 The video is also leaving some viewers concerned about Chick-fil-A's frying oil.

Update 8:51am CT: After publication, @nickcamacho123’s TikTok videos were set to private.

A Chick-fil-A worker revealed in a viral TikTok video one of the joint’s alleged secret menu items: mozzarella sticks.

The original video, which was posted by user @nickcamacho123, shows one worker folding up a slice of mozzarella, breading it, and then deep-frying it. He then enjoys the crunchy stick of gooey cheese.

Since being posted on Tuesday, the video has garnered over 250,000 likes.

Instead of being taken by the reveal of yet another one of Chick-fil-A’s alleged “secret menu items,” some viewers are expressing concern about the oil used to fry the mozzarella stick. “That oil looks like it belongs in a car engine,” one user commented, with another urging the workers to “change the oil.”

Another user who seemingly worked in the fast-food industry alleged that the state of the oil is business as usual. “Everyone who says the oil is bad has never worked in fast food before LOL,” they wrote.

In response to the comments, @nickcamacho123 posted another video of the oil—unheated—looking light and fresh. “What are you talking about,” he captioned the video.