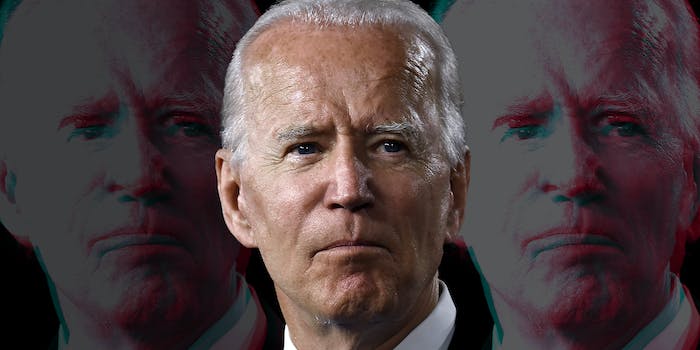 With Trump out, how does Biden feel about TikTok?

Biden hasn't said a lot about the app, unlike Trump.

While President Donald Trump‘s feud with TikTok may be winding down without a second term for his administration, President-elect Joe Biden has also raised concerns with the immensely popular app.

Trump’s attempt to ban TikTok over the summer eventually culminated in the app coming to an agreement to partner with Oracle and Walmart. But in the meantime, it faced imposed deadlines for a ban that were extended several times.

Right now, the ban received another extension. Meanwhile, as the transition begins between the two administrations, it looks like TikTok could still face pressure.

Biden has raised concerns about TikTok’s Chinese ownership and the amount of data it collects on users.

Although TikTok collects the same amount of user data, sometimes even less, than the average social media site, the company’s ownership by ByteDance, a Chinese company, has sounded alarms for some privacy experts. The Chinese government has forced companies in the country to hand over data in the past, raising concerns that the same could happen with TikTok.

But TikTok has repeatedly stated that the company has not and will not share user information.

Even so, Trump signed an executive order in August that initiated the months long fight to give American user data to an American company.

Things appeared to move forward for an American acquisition as Oracle and Walmart won the bid for TikTok in September. It happened after Microsoft and TikTok failed to come to terms for a deal.

Where the TikTok ban stands now

Since the news broke that Oracle and Walmart agreed to a complicated deal with TikTok, not much has happened.

Trump gave the company a deadline to finalize a deal on Sept. 29, but a judge temporarily blocked the download ban after TikTok filed a request for an injunction. It reasoned that a deal was moving forward, it just needed more time.

U.S. National Security Adviser Robert O’Brien said that he expects Trump to follow through on the ban.

“We’re now looking—those court cases are ongoing, so the federal government will wait and see what our courts tell us we can or can’t do with respect to those bans,” O’Brien said, according to Bloomberg. “I think ultimately the president’s authority with those bans on those apps will be enforced. And I think even if there’s a change in administration, those bans will take place.”

Biden has not said much about a TikTok ban

While Trump seemed focused on TikTok ahead of the election, his interest seems to have waned. Meanwhile, Biden has also not said much about the app.

But, the president-elect mentioned the debacle on his campaign trail in September.

“I think that it’s a matter of genuine concern that TikTok, a Chinese operation, has access to over 100 million young people particularly in the United States of America,” Biden said according to Reuters.

Representatives for Biden did not return a request for comment by the Daily Dot. However, a technology advisor on Biden’s transition team told CNBC that it was “too early to say” what Biden’s views on the app were.

While he hasn’t mentioned TikTok much, Biden has been an ardent critic of Trump’s strain with China—particularly on trade.

“If we don’t set the rules, we in fact are going to find ourselves with China setting the rules, and that’s why we need to organize the world to stop China to stop the corrupt practices that are under way,” Biden said at a debate.

Trump’s “America First” trade policy put fierce pressure on China by tariffing two-thirds of Chinese imports. It began a back and forth that likely pulled TikTok into the middle of the China and U.S. tension.

Experts say even if he wanted to, it will be difficult for Biden to reverse what Trump has done.

“I think the continued inflammatory rhetoric that President Trump has used toward China has basically made it impossible for any administration to immediately come in and change course,” Chad Bown, senior fellow at the Peterson Institute for International Economics, told NPR.

In addition to the trade war Biden will inherit with the presidency, national security concerns regarding TikTok have bipartisan support.

Looking into TikTok began as an issue proposed by both sides. Republican and Democrat Senators called for a national security investigation into TikTok in November of 2019.

Essentially, it remains to be seen how exactly things will move forward for TikTok with Biden in the White House.