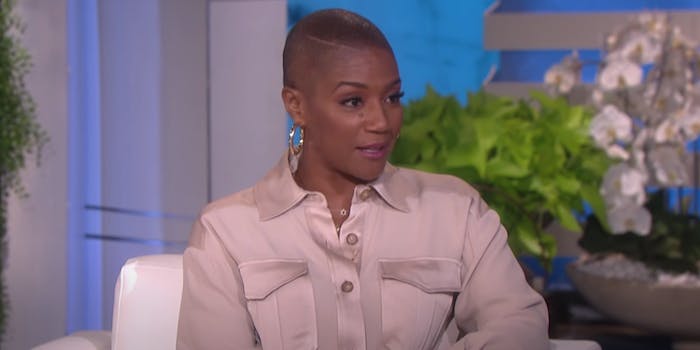 Comedian and actress Tiffany Haddish is being accused of cyberbullying and allegedly doxing a Black woman doctor while pandering conspiracy theories about COVID-19.

Along with other celebrities, including podcaster/rapper Joe Budden, rapper the Game, Hollywood Unlocked CEO/host Jason Lee, and controversial wellness advocate and conspiracy theorist Chakabars, Haddish came for medical professionals in a COVID-19 discussion on the popular Clubhouse app. According to observers, the trio perpetrated notions that COVID-19 is a government-produced virus supposedly built to subvert privacy freedoms.

When a doctor only referred to online as “Kayla” spoke up about the pandemic, she was reportedly bullied in the chat session and then allegedly doxed by Haddish. Haddish and Chakabars, specifically, believed themselves to be attacked for their views by the opposing force from “agents of white supremacy,” as one of the doctors was allegedly called.

With the accusations floating around, there’s no evidence beyond the allegations of people who later tweeted about the conversation. (Clubhouse is a voice-based social app.) But there are unverified reports that the doctor was traumatized by the experience and attempted to harm herself.

Haddish hasn’t spoken directly to the incident but has essentially taken to calling her critics liars while not stating the rationale for her defensiveness. On Friday, she posted an interview that she conducted in August with COVID authority Dr. Anthony Fauci.

Dr. Jessica Isom, a psychiatrist, was also reportedly one of the Clubhouse members bullied and doxed, and talked about the incident’s after-effects in a detailed thread. In a tweet, she says, “my profile was tweeted by a person who is connected with celebrities who wanted consequences for perceived bullying by yours truly” and that “a celebrity read my name aloud in a room of 2K individuals instructing them to engage in bullying.”

She’s also one of many asking Clubhouse to take accountability.

“As a psychiatrist, every human being in this convo needs to recognize the deadly consequences of bullying,” she tweeted. “Speak up. Speak out. Save a life. There are many people who are actively complicit in pushing a Black woman to the edge. And targeting others. @joinClubhouse accountability?”

She added: “My name has been included on the ‘target’ list. Yet, I will not be silenced. To all those using the hashtag to highlight the incident, I and others appreciate you. You are on the right side of humanity. Thank for you taking a risk and publicly speaking on the issue.”

The Daily Dot has reached out to a representative for Haddish.