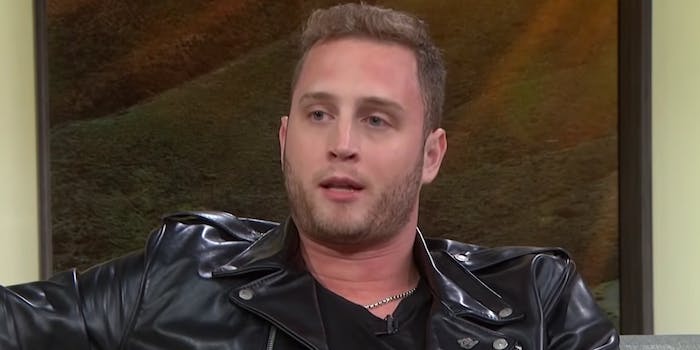 'I have no ill intentions, and I'm just being myself.'

Chet Hanks, son of Academy Award-winning actor Tom Hanks, keeps finding himself flamed over his Jamaican “blaccent” and has decided to die on this particular hill in defending it. Now, on the social media app Clubhouse, he continues his defense of the racist “verbal blackface” title.

In fragments of a session within a Clubhouse “room” this week, Hanks, 30, defended his egregious use of patois, stating: “I have no ill intentions, and I’m just being myself.”

Right, so then as a comparison, he says: “If I get on a binge or if I’m watching a bunch of English gangster movies and I’m just going about my day-to-day business like ordering a coffee in Starbucks and be like *mimicks Cockney accent* ‘Gimme a latte!'”

For one, if, in fact, he does this, it’s patently weird. Secondly, as the other speakers on Clubhouse reminded him, white English gangsters typically were not (or are not) being discriminated against for their race or ethnicity.

During the Clubhouse chat, Hanks was actually defended by a Jamaican person who said some are happy that Tom’s son embraces their culture. However, this wouldn’t be unlike some indigenous Americans not being offended by a racist team name.

“I notice how he got more ‘clueless’ as the room grew. He loves the attention,” Okafor tweeted.

Ultimately Hanks’ defense, and reasoning for it, fell way short of muster, and the ridicule came in like his patois: heavy-handed and out of pocket. Twitter went off.