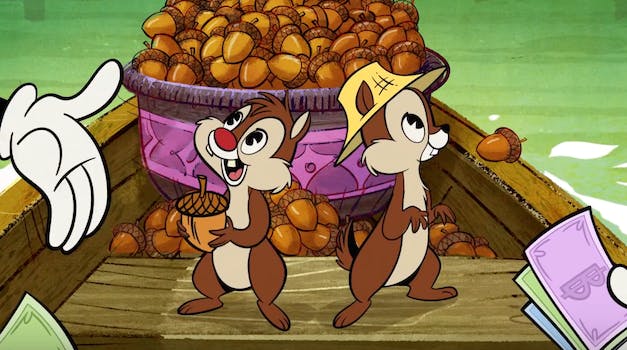 How a 10-second Disney jingle became a meme in Thailand

The songwriter is 'amused, flattered, and relieved' by the meme.

Quincy Surasmith was surprised to find that a Disney jingle he wrote in March had become a meme in Thailand.

Surasmith is a journalist, actor, and podcast producer based in Los Angeles, California. Surasmith tweeted that he only found out about the virality of his 10-second song by perusing a Thai hashtag.

Okay the like 10-second song I co-wrote for the Disney short is becoming viral in Thailand and getting meme-ified HARD, which I only found out by looking through the Thai hashtag #ชิพกับเดล

For context: I wrote several real songs in the early 2010s to ZERO ACCLAIM.

The song appears in a Disney cartoon short about Mickey and Minnie Mouse at a market in Thailand, each searching for the perfect spot to sell their goods. While the two fight over a spot, Chip and Dale swoop in and claim the spot as their own to sell nuts to excited customers.

The song is in Thai, but Surasmith tweeted its translation.

“Chip and Dale, these two brothers, sell things in the canal, in the pile, there’s only good nuts, just freshly picked, come eat them all!” Surasmith translated.

Surasmith told the Daily Dot that when he wrote it, he wanted to be as culturally authentic as possible.

“Disney’s cartoon short was in Thai, and I wanted to do my due diligence to lend it as much honesty and cultural foundation as possible in that depiction,” Surasmith said. “The content’s pretty simple, it’s about chipmunks selling in the canals of the water market. But I took lyrical and musical cues from Thai traditional, folk, and country music as my inspiration to give the song some personal spark.”

People started making a range of remixes to the catchy tune, including R&B, death metal, and piano covers.

Surasmith said he’s amused, flattered, and relieved to see all the covers of his work.
“Amused because internet culture has a postmodern way of really doing all sorts of remixes to art and media, and you just have to laugh when it’s your own work,” Surasmith said. “Flattered that people think it’s memorable enough … to even bother with the effort. And relieved that there were no outcries of inauthenticity (which, as a Thai American, I’m sometimes concerned about how my work reflects my identity and how it fits into modern Thai culture).”

While the song is only a few seconds long, it’s become such an earworm that the Thai government had to issue a guide on how to get it out of one’s head.

lolol what is happening over there https://t.co/L78khneicH

People are just as excited about the jingle and renditions as Surasmith is.

I'm Thai. When I first saw the short film I was already perplexed and happy to see Disney's take on Thainess. Then, the song from Chip n Dale has become an earworm that I was annoyed and enjoyed at the same time. Great job!!!

Surasmith said he was surprised that out of all the works he’s created, this is the one that took off.

“In the early 2010s, I was playing in a band as well as performing some original songs as a singer-songwriter,” he said. “I never seriously pursued a music career, but I did have some experience with it. It just felt funny that of all the music I’ve written, it was a 10-second little song for a cartoon that would do the best.”