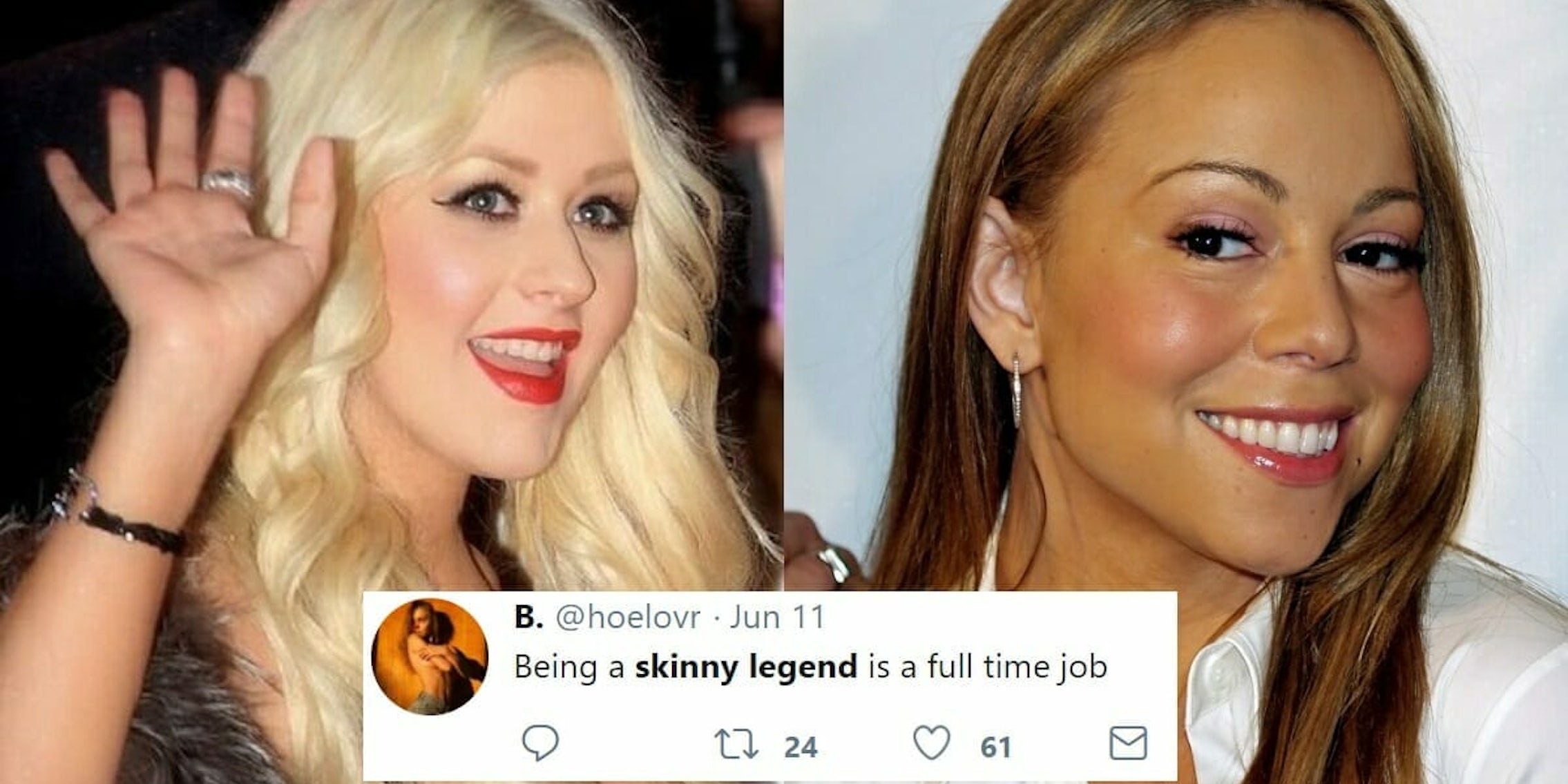 What does it mean to be a ‘skinny legend’?

Get the skinny on 'skinny legend.'

Reserved for only the most iconic and flawless pop culture idols, the term “skinny legend” is one of the hottest crazes to hit social media. The phrase has been especially trendy on Twitter, where it is used by “stans” to affectionately describe their favorite celebrities. Forget telling your favorite stars to “delete it, fat.” A new, thinner sheriff is in town.

Despite only recently gaining recognition, the phrase can actually be traced back to the glory days of “Gangnam Style” and #YOLO, where it was used infrequently to refer to a celebrity’s slender figure. Although it gradually moved away from this definition and now refers to one’s “iconic” status, regardless of their actual physical fitness, “skinny legend” has come under fire for its body-focused language and accompanying memes.

No matter the controversy, skinny legends continues to flood feeds and timelines across social media.

Although its exact origins remain a mystery, the term used in its modern definition can be found on Twitter as early as 2012. Not to be confused with Ghanaian musician Skinny Legend, the seeds of “skinny legend” as we know it today were laid by various “regular” users who sporadically incorporated the term into their tweets in positive or aspirational ways.

As stan culture rose in popularity, so did the phrase. The “original” skinny legend was none other than pop singer Christina Aguilera, who received the honor in early 2014 (though one user referred to her as a “skinny queen” in 2012). Although a few of the tweets alluded to her physical appearance, it is still unclear whether the phrase was directly addressing weight or body image.

Back to her skinny legend looking self 1 month after giving birth. Queen @Xtina pic.twitter.com/ir4dQYVeQn

The earliest use of the hashtag #skinnylegend was also used in 2014 to describe Xtina.

Surprisingly, Wiz Khalifa held some skinny legend status during this year as well.

Stans of other fandoms quickly caught onto the trend and adopted it for their own celebrities, mostly female pop stars such as Demi Lovato and Britney Spears. Much like the endearing “mom” moniker, the new slang flooded timelines everywhere at the hands of young fans and their keyboards.

Yes @pullmydaisies and I stan this skinny legend i bet shes vegan pic.twitter.com/n7i2CfPDC9

The occasional meme was also made, naturally.

According to Google Trends, “skinny legend” hit its peak as a search term in late May.

The surging popularity of the phrase may have to do with its latest manifestation: the snake edit. Users added a unique flair to the term with bizarrely photoshopped images of their favorite celebrities, distorted in such a way that their bodies looked twisted and surreal. The most widely shared snake edits circulated in early 2018 but can be seen as far back as 2016. A “skinny” photo of Adele was posted in a May 2016 forum thread on Classic ATRL.

Mariah Carey is perhaps the celebrity most heavily associated with “skinny legend,” possibly due to a reply tweet that went viral in February 2017.

An Urban Dictionary definition was added shortly after in May. It defines “skinny legend” as a “phrase used by a social media sub-group called ‘stans.’ It is commonly used to refer to celebrities as Mariah Carey who are glamorous and talented, no matter their weight. It is also used ironically to refer to cute animals, people, objects etc. Twitter trolls use it often in their memes.”

A skinny legacy: What’s next?

As always, nothing remains unproblematic. Once a term of affection, “skinny legend” has now become a target for those who say it promotes harmful ideas about body image and feeds into diet culture. An article from Revelist criticized the phrase for seemingly equating thinness with importance and pointed out that users were also utilizing the term to refer to themselves and their eating habits.

if britney can get this fit again i can too. my fat ass needs to lose weight FUCKK. my queen always inspires me #skinnylegend https://t.co/WwuL6uaIyj

However, some people say it is a subversive way to mock the media’s standards of beauty by turning the ideal on its head. Others claim the term is a fun expression and actually refers to one’s confidence rather than body image.

You know the term skinny legend is about someone being iconic and it has nothing to do with your weight https://t.co/LKM4PaWBMl

No matter its fate, we’ll forever be grateful for what it gave us: countless photos of Mariah Carey’s body Photoshopped in ways we never even knew we wanted.