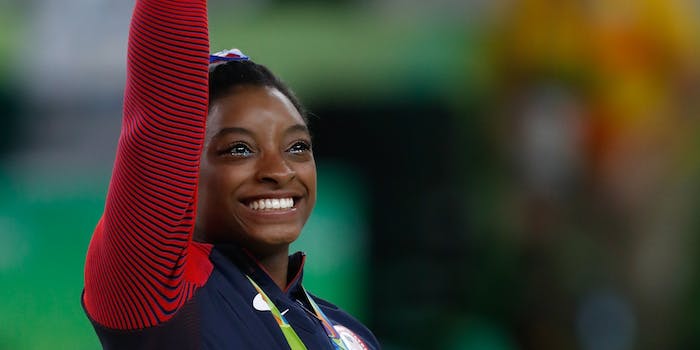 She earned a standing ovation for her performance on the balance beam.

Six days after withdrawing from competition at the women’s gymnastics team finals, Simone Biles has made a triumphant return to the Olympics. Biles competed Tuesday in the balance beam event, winning a bronze medal behind Chinese gymnasts Chenchen Guan and Xijing Tang. Despite pulling out of four of the five events she qualified for at 2021’s Olympics, she is now tied for the most medals won by any U.S. gymnast.

Biles chose to withdraw from her earlier events due to mental health reasons, a choice that attracted ill-informed criticism from some angles but generally inspired a wave of praise and support—both from her fans and from other athletes. When she returned to the competition Tuesday, her fellow gymnasts gave her a standing ovation.

As one of the most iconic athletes at the Tokyo Olympics, Biles’ surprise withdrawal was a major topic of discussion. Alongside tennis player Naomi Osaka, she has inspired many people to think more deeply about how mental health impacts the lives of professional athletes and how mental and physical wellbeing are intertwined. Many are praising Biles for her bravery after speaking out about her struggles, a great moment of vulnerability for an athlete in the public eye.

Speaking to the press after winning her medal Tuesday, Biles said, “I think it should be talked about a lot more, especially with athletes, because I know some of us are going through the same things and we’re always told to push through it. But we’re all a little bit older now and we can kind of speak for ourselves.”

Biles also said that she hadn’t expected to medal, adding, “It definitely feels more special, this bronze, than the balance beam bronze at Rio. I will cherish it for a long time.”