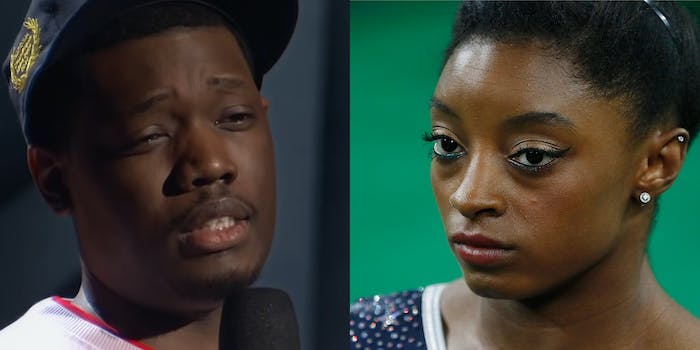 Saturday Night Live’s Micheal Che claimed his Instagram was hacked after several derogatory jokes about Olympic gymnast Simone Biles were shared and rated on his Instagram Stories—including one that compared her dropping out of the women’s gymnastics team finals to Larry Nassar finally facing consequences for years of sexually abusing Biles and other teenage gymnasts.

Though the Instagram Stories have now been deleted, numerous people took screenshots and shared them on Twitter, where the furious reaction to the content of the jokes is still ongoing.

In addition to sharing another Instagram user’s joke about Biles and Nassar, which he rated a 9/10, and another that used the phrase “Black don’t crack” Che—or the alleged hacker—also expressed a desire to make fun of Biles more generally, and the intention of dedicating three minutes to it in a comedy set that night.

It was in the face of overwhelming backlash, that included calls to HBO and SNL to remove Che from their programming, that Che posting the claim about being hacked to his Instagram.

However, a lot of people don’t believe him, citing his history of jokes about women, queer people, and other Black people, as well as the fact that he used the same font and colors as the alleged hacker in his explanatory post. Many Twitter users feel the hacker is an excuse created after he realized “how beloved Biles is,” and how making fun of her trauma wasn’t going to end in back-slapping laughter.

It’s also reignited the endless debate about whether rape jokes, and jokes where marginalized people are the punchline, are actually funny. While a minority dragged out the tired claim that it’s essential for humanity to be able to laugh at everyone and everything, others, especially women and people of color, did the work of once again explaining why rape jokes, and other humor targeting the marginalized, are harmful rather than hilarious.

Che has since deleted all of his Instagram posts, but is currently still commenting on the situation through his Instagram Stories.