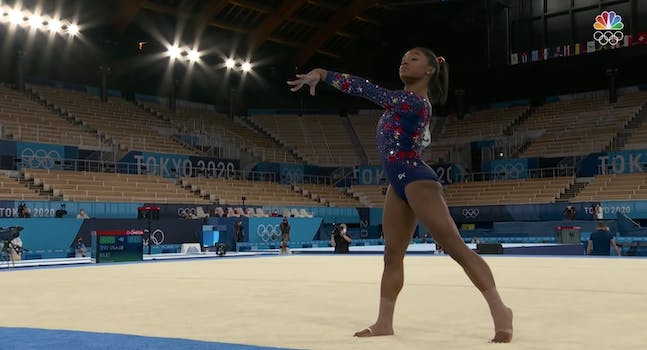 ‘That girl has endured more trauma by the age of 24 than most people’: Viral Instagram post shuts down Simone Biles’ critics (updated)

Biles eventually retweeted the post, prompting calls for the public to give it a read.

A gymnastics coach’s response to the criticism Olympic champion Simone Biles is receiving has gone viral.

Biles pulled out of events at the Tokyo Olympics for mental health reasons. Biles spoke about her decision in an interview with BBC Sport and said, “After the performance I did, I just didn’t want to go on. I have to focus on my mental health. I just think mental health is more prevalent in sports right now.”

Biles continued, “We have to protect our minds and our bodies and not just go out and do what the world wants us to do. I don’t trust myself as much anymore. Maybe it’s getting older. There were a couple of days when everybody tweets you and you feel the weight of the world.”

In the post, Orris spoke to her frustrations around the conversations happening about Biles’s decision to pull out of the competition.

“We are talking about the same person who was molested by her team doctor throughout her entire childhood and teen years,” Orris wrote in the lengthy Instagram Story. “won the World All-Around Championship title WHILE PASSING A KIDNEY STONE, put her body through an extra year of training through the pandemic.”

Orris continued to point out all of Biles’ accomplishments and further explained why Biles was right to put her mental health first. “And some people can still honestly say, ‘Simone Biles is soft. She is a quitter’… That girl has endured more trauma by the age of 24 than most people will ever go through in a lifetime.”

She also explained Biles’ balk (or hesitation mid-air) and how severe the consequences would’ve been if she wasn’t as talented as she is. “She could have been severely injured getting lost in the air like that, [and] the fact [that] she somehow landed on her feet shows her experience and is incredible. A very small wrong move, [can be] career-ending or even worse, life-threatening injuries can occur.”

Both Marino and Orris’ are being met with support online for their posts. Biles eventually retweeted Marino’s tweet, prompting calls for the public to give it a read. “Seeing as @Simone_Biles herself has retweeted this, it really should be read by anybody tempted to leap to ill-informed judgement,” one said.

“As a former Level 10/elite and D1 gymnast who grew up in an abusive gymnastics environment, I’ve made it a personal mission to work towards change in the gymnastics culture.  I, and many others, have dedicated our lives to getting the sport to a safe place.  What Simone did was so big for Gymnastics.  The fact that she had a choice to take herself out of the competition is a huge deal.  In past Olympics, the girls had little to no say in what they did, and were terrified to speak up if they were in pain or struggling.”

Orris said she was happy Biles saw her post and hoped she felt “validated, valued, and supported by her country and the gymnastics community.”

Additionally, she further explained the danger of balking, or as she put it, “The Twisties”:

“It’s a mental block which many gymnasts experience, where you lose your arial awareness and get “lost” in the air.  You lose track of how many twists you do, you twist when you don’t want to, and you lose control of your own body.  The skills she’s doing are SO difficult, that an error caused by this mental block could end her career or cause her a life-altering injury,” she elaborated. “I firmly believe she made the correct decision, and that she has no regrets from her choice.