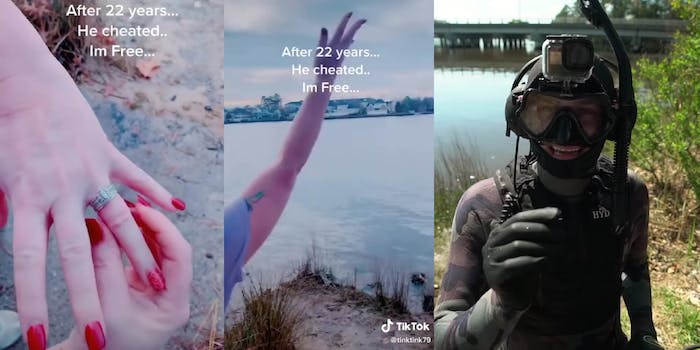 Two and a half months after TikTok user @tinktink79 threw her diamond engagement ring into a river because her husband cheated on her, it has been retrieved.

After tinktink79 tossed her engagement and wedding rings, plenty of viewers joked about going diving to find them. But one scuba diver actually did.

Scuba diver Jake Koehler traveled over 20 hours to dive for the rings, and he eventually found them. Koehler is a diver from Georgia and has over 10 million subscribers on YouTube. His video documenting his dive already has over 385,000 views.

Koehler said he saw the woman’s TikTok a few weeks ago, but had no idea where she lived or where the body of water from the video was. Koehler said he used Google Maps to find the spot, which is near Virginia Beach.

The drive was about 10 hours there and 10 hours back for Koehler, and he said he felt he was taking a huge risk because there was no guarantee he would find the rings.

Koehler only had the TikTok to go off of, but he found where the woman threw her rings.

Koehler scoured the river floor with a metal detector to find the rings. He found loose change, a fork, an iPhone, and eventually, the woman’s engagement ring.

“The big one!” Koehler exclaimed. “It’s real, I thought she could’ve faked it.”

Koehler couldn’t find the wedding band, but was still ecstatic about finding the engagement ring.

Koehler asked his fans what he should do with the rings, since the woman doesn’t want anything to do with them.

“Maybe I should pawn it, sell it, do something really kind with the money—give it to someone in need,” Koehler said.

Viewers suggested Koehler use the money to buy his girlfriend a ring, donate to coronavirus relief efforts, or donate to food banks.