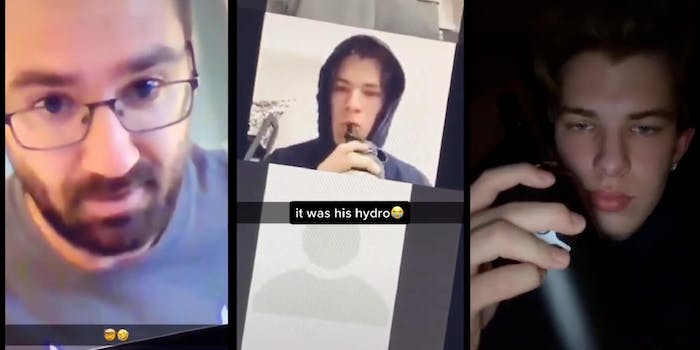 Things went off the rails.

With coronavirus (COVID-19) driving us all behind closed doors, many people are participating in work and school duties from home. For high school students, that means attending lectures from behind a screen. One student from Valencia, California, recently hit a snag while doing so, leading to a truly spectacular TikTok.

Cameron Stein is trying to finish out his senior year from home. He’s been attending all of his classes via Zoom, where he can participate in projects via video chat. A few days ago, Cameron woke up a touch late and had to rush to his digital English class. When he signed on, unfortunately, he quickly found himself without sound. To make matters worse, his computer required an update before it could restore his audio.

So, with his computer updating in the background, Cameron attended English without sound.

That meant he was entirely unaware when, mid-lecture, his teacher paused to call him out for what he thought was vaping. Cameron was, in fact, just drinking from his Hydro Flask. Since he couldn’t hear his teacher’s gradually mounting irritation, however, Cameron just kept sipping along while the lecture mutely proceeded.

We can all be privy to this glorious moment of miscommunication thanks to Cameron’s girlfriend, who was attending the same class. She caught several shots of the teacher’s reactions to Cameron’s supposed vaping and made sure to share them with her unwitting boyfriend—and on TikTok—when class concluded.

The resulting video is pure gold.

Twice, the teacher calls out Cameron, who—to anyone unaware of his situation—appears to be completely unconcerned. Throughout the video, he continues to take swigs from his Hydro Flask. In an interview with BuzzFeed, Cameron noted that some of his classmates were sending him question marks and inquiring after his odd lack of response, but without context, he had no idea what they were talking about. So he proceeded as usual until his girlfriend revealed her TikTok to him after class.

Cameron’s update didn’t finish until the last few minutes of the lecture, so he missed out on all of his teacher’s outbursts. When everyone signed off, however, he found himself suddenly inundated with messages and calls from his classmates. They wasted no time in explaining the hilarious misunderstanding.

Cameron later posted his own version of the mix-up to TikTok, where it joined his girlfriend’s upload.

Eventually, someone cleared things up for the teacher as well. While he declined to comment to BuzzFeed, he reportedly later apologized to Cameron. For his part, Cameron didn’t mind.

“I know that my teacher was really concerned and only wants the best for his students,” he told BuzzFeed. “He is actually a really great teacher.”