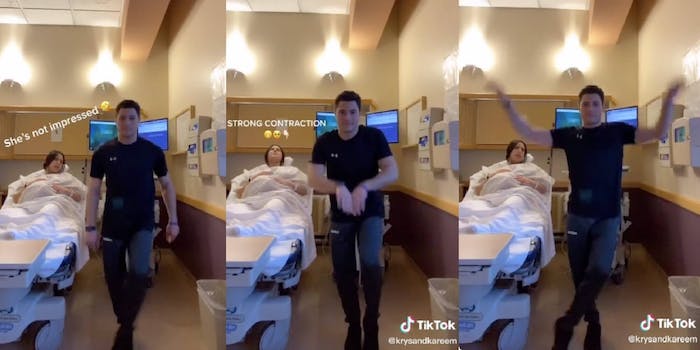 Maybe somebody tagged him in the dance challenge, and it felt undeniably urgent?

Most women want their partners with them when they give birth. Or if not their partners, someone to fulfill a similar role in the moment—to reassure them, hold their hand, help them through this mind-numbingly painful experience that brings an entirely new living creature into the world.

But we live in a social media-centric world, and are you really even present at your child’s birth if you don’t record it for posterity and broadcast it to the world?

No, we’re not talking about uploading actual childbirth videos. Pass. But father-to-be Kareem Antar decided to commemorate the contractions leading up to his son’s arrival by, um, doing a dance next to his wife Krystle’s hospital bed and posting it to TikTok.

The video shows Kareem partaking in the #distancedance challenge, a trend started by TikTok star Charli D’Amelio to urge people to stay home during the coronavirus outbreak. Instead, Kareem brought the dance to the hospital while Krystle casually goes about the process of getting ready to give birth to his child.

It’s not immediately clear what the point of this video is, but it’s definitely a Choice with a capital C. Was Kareem so excited he was about to become a dad that he felt moved to record a video in the moment? Had somebody just tagged him in the #distancedance challenge, and it felt undeniably urgent?

Krystle wasn’t thrilled with her man at first, but later told BuzzFeed that she’s happy her son will have the TikTok labor video to look back on and “see who his dad really is,” a sentiment that definitely feels like it has some hidden meaning to it.

But it seems like Krystle is ultimately taking the video in stride.

“I was completely shocked that he had the audacity to make a TikTok during my contractions. But that’s typical Kareem, he is just a lovable and goofy guy,” she said.

Krystle sounds a lot more patient than most people would be in her situation, especially judging by some of the comments the video drew from folks online.

“This man is lucky to be alive right now,” Twitter user @kathrynw5 wrote about the TikTok labor video.

But hey, they got a TikTok video out of it, so all’s well that ends well.

Oh, and a baby. Nearly forgot about the baby, super distracted by the dance. Congrats.