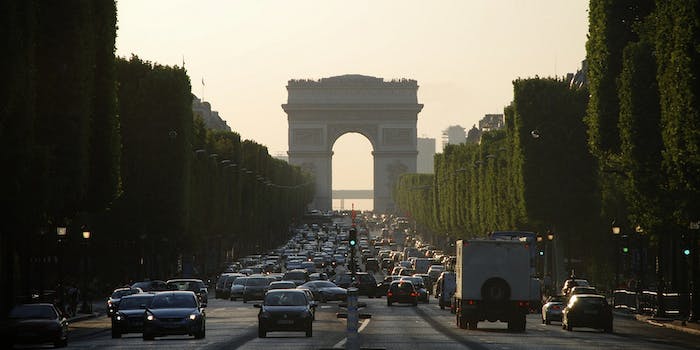 Authorities are hunting for a man who critically wounded a photojournalist Monday and may have orchestrated simultaneous DDoS attacks.

In a chilling indication of how direct violence and cybercrime may entwine in the years ahead, it appears as though a string of shootings in Paris were timed to coincide with distributed denial-of-service attacks on the gunman’s main targets, Le Figaro and several Twitter sources reported: leftist newspaper Libération and major bank Société Générale.

As per update from @liberation_info’s iPhone app, said French paper’s website was hacked but is again operational

The suspected shooter, still at large, and confirmed by President Francois Hollande to be the same man who Friday opened fire at the offices of television network BFMTV, is now the focus of an intense manhunt. On Monday morning, he shot a Libération photographer, leaving him critically wounded, and squeezed off three more rounds outside the headquarters of Société Générale.

He left the scene calmly and later took a motorist hostage in the nearby town of Puteaux by saying he was armed with grenades, securing a ride back to the Champs Elysées, where he may have boarded the Paris Metro. Police and BFMTV have released images and surveillance video of the suspect, who has made no real effort to disguise himself.

It was impossible to tell, as Libération tweeted that their website had gone down and Société Générale reported that customers were complaining of inaccessible online services, whether the digital attacks were connected to the shooting rampage, but to call it a mere coincidence does stretch credulity somewhat. It’s likely we won’t know more until the gunman and any accomplices are brought into custody; all the same, the hacking could well have been a coordinated diversionary tactic, or just a way of sowing further confusion as the chaos unfolded.

Photo by Eduard Díaz i Puig/Flickr