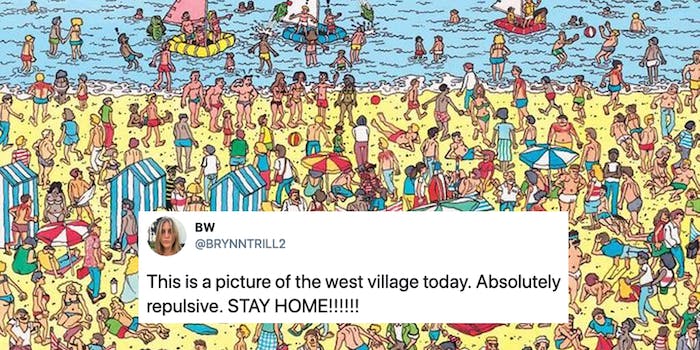 'Really disgusted by this picture I found of people in the park...'

The first weekend of May gave much of the country—the east coast, in particular—the first real taste of springtime weather we’ve seen so far. Naturally, this brought millions of quarantined denizens out of the stuffy homes we’ve holed up in over the past seven or eight weeks to partake in a little outdoor social distancing. And that’s a good thing! People need sunlight and fresh air in these fraught times, if for no other reason than mental health.

The bad thing, however, is that unfortunately, the definition of “outdoor social distancing” was fairly loose, as photos began to go viral of literal hordes of people crowding into parks and other open spaces—particularly in large cities and other urban oases. It’s hard to not have at least a little sympathy for people. This pandemic has been a lot, even for healthy individuals.

But at the same time, come on!

As photos and videos of the so-called outdoor social distancing in Manhattan parks—in particular—began circulating online, New York City-based writer Celeste Yim shared one such image. “It has been nothing short of an honor to have stayed inside for eight weeks for these amazing people in the West Village today,” she tweeted on Saturday evening.

Yim’s tweet quickly went viral, and others joined in adding their own outdoor social distancing memes. Users began adding images of everything from Where’s Waldo and films such as 500 Days of Summer, the 1978 adaptation of Grease, and Midsommar; to famous works of art like pointillist artist Georges Seurat’s masterpiece “A Sunday Afternoon on the Island of La Grande Jatte” and a panel from the Hieronymus Bosch triptych “The Garden of Earthly Delights.”

Others shared memes representing what outdoor social distancing should ostensibly look like!

Though there has been a lot of misinformation spread online—particularly when it comes to the virus being airborne and how long it retains potency after being exposed to sunlight and other elements—it’s probably best to practice smart outdoor social distancing for now, anyway.

After all, if the ‘rona doesn’t get you, the murder hornets might.