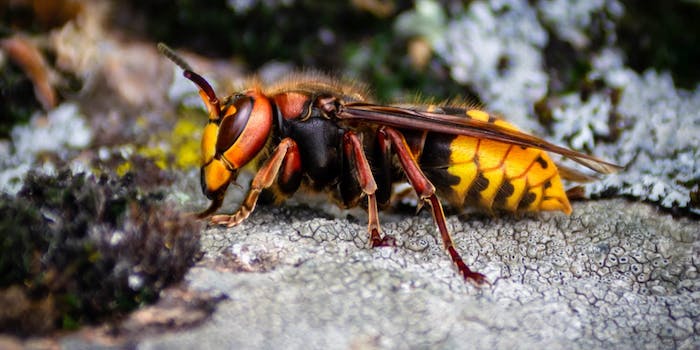 Murder hornet memes show just how savage 2020 has been

First Kobe. Then coronavirus. Now murder hornets have arrived in the U.S. What’s next?

Just when we thought 2020 couldn’t get any worse.

According to various news reports, a species of Asian “murder hornets” have arrived in the U.S., with researchers looking to eliminate them before their populations grow.

These lethal creatures can grow up to 2-inches long and wipe out bee colonies within hours. To make matters worse, their stingers are long and powerful enough to puncture beekeeping suits, too. Their stings reportedly feel like hot metal being driven through one’s skin.

According to the New York Times, Japan attributes 50 human deaths per year to the aggressive insect. Beekeepers in Washington, meanwhile, have already seen the hornets decimate their hives.

Beyond its size, the hornet has a distinctive look: “A cartoonishly fierce face featuring teardrop eyes like Spider-Man, orange and black stripes that extend down its body like a tiger, and broad, wispy wings like a small dragonfly,” the Times reports.

Now that the insects appear to have found their way to the U.S., scientists are attempting to track and prevent further bee colonies from being destroyed, while reducing the murder hornet population.

“This is our window to keep it from establishing,” Chris Looney, an entomologist at the Washington State Department of Agriculture, told the Times. “If we can’t do it in the next couple of years, it probably can’t be done.”

A quick recap of all the bad sh*t to happen in 2020: Kobe Byrant’s death, the Australian wildfires, a theoretical World War 3, the Pentagon’s release of UFO videos (depending on how you look at it), and devastating floods in Indonesia. Oh, and don’t forget we’re still grappling with the deadly coronavirus.

Who wouldn’t care to add murder hornets to the mix?  Of course, their arrival here has spurred various memes asking just how bad this year can get.