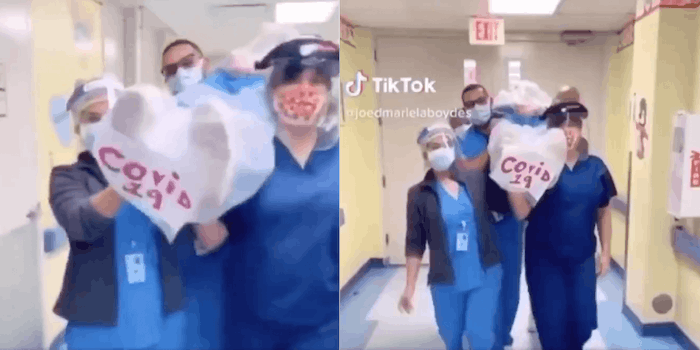 The TikTok was not well-received, to put it lightly.

A recent TikTok made by nurses is getting viewers seriously worked up.

The nurses in question attempted to recreate the “dancing pallbearers” meme by dancing down the hallway of a hospital to upbeat music, carrying a fake “corpse” labeled “COVID-19.”

The TikTok was not well-received, to put it lightly.

The video was called “gross” and “distasteful.”

“This *literally* might be the single most tasteless thing I have seen all year,” another user tweeted.

Though many thought the TikTok was made in poor taste, others defended the healthcare workers and said they were just trying to blow off steam.

“The amount of stress they are under is crazy and all they want to do is have a bit of fun. Lighten up,” one user said.

One Twitter user even said viewers didn’t understand the meme. They said the nurses weren’t carrying a victim of COVID-19, but the body was meant to represent the actual virus once healthcare workers defeat it.

The United States now has over 1 million confirmed cases of COVID-19 and over 60,000 deaths, according to the Centers for Disease Control and Prevention. Many have been personally affected by COVID-19 and don’t see the humor in coronavirus memes.

This is not the first time so-called “TikTok nurses” have come under fire on social media. Nurses and other healthcare professionals have received serious backlash for spreading false information on TikTok, where many users are young and less informed. One nurse’s TikTok making fun of patients’ pain went viral and even sparked the hashtag #PatientsAreNotFaking in retaliation.

Viewers have conflicting feelings about nurses making coronavirus TikToks, but this one in particular hit a nerve.