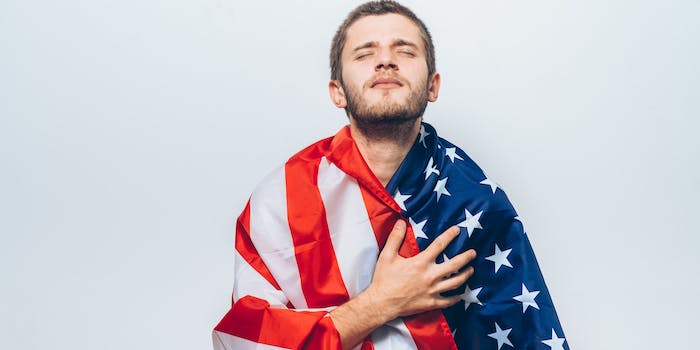 'As soon as you hear 'somebody once told me the world is gonna roll me' you need to be OUT of your seat.'

The national anthem has been a point of contention in the United States for the past several years. Specifically, some major athletes’ decision to take a knee while it plays ahead of a game in peaceful protest of police brutality and racial injustice has not been well-received by some people who insist it is “disrespectful” to the country.

To others, the idea that paying respect to a flag is more important than calling attention to the senseless deaths of Black people in the U.S. is absurd.

That may be the reasoning behind a joke format that has swept across Twitter in recent days—or it’s at least certainly how most people are taking it.

Every tweet starts the same, pretending to be stone-cold serious about finding it “extremely disrespectful when people don’t stand for the national anthem.” After that, people are pivoting to share the opening lyrics to a wide variety of songs, none of which are from “The Star-Spangled Banner,” the actual national anthem of the United States.

As best as anyone can tell, the format started innocuously enough, with the rabbit hole of most of the quote tweets leading back to this one:

But people have made the most of it, sharing their own preferred lyrics for an ideal national anthem, and the variety is incredible, as is realizing how immediately recognizable so many songs are from just a few opening words.

However, some have expressed concern that the meme makes light of the reason people have chosen to take a stand, so to speak, by refusing to stand for the national anthem.

“The majority of the people that are doing that ‘I find it extremely disrespectful when people don’t stand for the national anthem’ meme & find it funny are white,” @CriticalBard said, later making the claim that “half of the folk who did [the meme] probably didn’t actually back up [Colin] Kaepernick on his actions or did something truthfully in support of the black folk who choose to remain seated.”

Either way, the format doesn’t seem to be going away anytime soon—probably not until just about every song under the sun has casually been declared the new national anthem, at least.