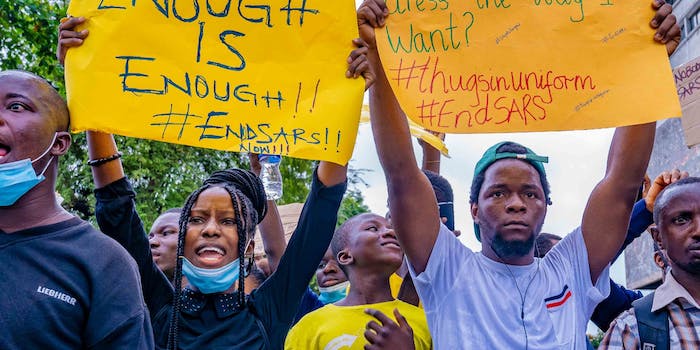 The tech company says a mixup with its systems caused the posts to be inadvertently labeled as false.

Instagram users are having their posts regarding the #EndSars protests in Nigeria flagged, leading many to accuse the site of censorship.

The issue has been raised all across social media as users attempt to bring awareness to the protests, which are directed at a Nigerian police unit known as the Special Anti-Robbery Squad (Sars).

The protests reached a fever pitch on Wednesday after several demonstrators in the city of Lagos were reportedly wounded and killed by gunfire.

Although the police unit has now been disbanded, the outcry has only intensified given that Sars has been accused for years of harassment, assault, and extra-judicial killings.

But users say Facebook, which owns Instagram, has been flagging their #EndSars posts for allegedly containing “false information.”

“I posted pray for Nigeria and they deleted it and said it’s false information,” @konanplaydirty said.

Another user claimed that several of their posts, including one merely showing an image of a bloodied Nigerian flag, had also been flagged.

One of the screenshots, however, shows exactly what caused the issue to begin with. Instagram appears to have confused certain #EndSars posts with another story potentially related to Severe Acute Respiratory Syndrome (SARS).

The fact check notice reveals that the post was flagged because Instagram believed it was related to the false claim that CNN aired a chyron about “two deadly viruses” killing Nigerians.

The social media giant has struggled with misinformation relating to coronavirus as well, which is also known officially as Severe Acute respiratory syndrome Coronavirus 2, or SARS-CoV-2, possibly aiding in the confusion.

The fact that the debunked claim involved Nigeria and potentially the term “SARS” appears to be why posts linked to #EndSars were flagged.

A Facebook spokesperson confirmed in a statement to the Daily Dot that the #EndSars posts were being inadvertently flagged.

“We are aware of an issue where some posts in support of #EndSARS are being incorrectly flagged as false in our systems,” the spokesperson said. “We are working quickly to resolve this.”