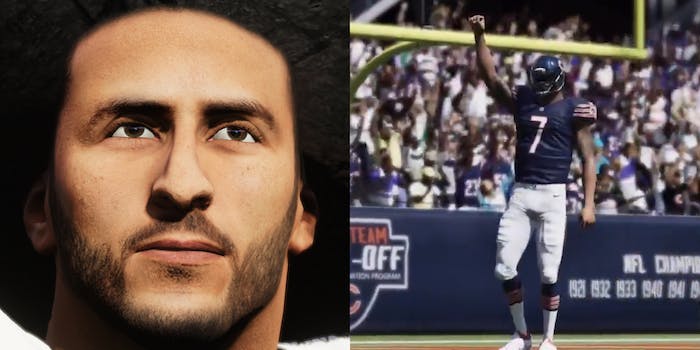 The gaming franchise makes an unexpected move. The internet is skeptical.

It’s been three years since Colin Kaepernick has played on a football field. The former San Francisco 49ers quarterback was blacklisted after sitting during the national anthem at an NFL preseason game in 2016. That night, he told reporters that his actions were “… to protest the injustices that are happening in America…” What resulted was years of backlash, a terminated contract, and one of the most influential movements in sports history.

In 2020, a novel positive shift in cultural acceptance of protests against the harm that Black people endure in America has occurred, causing brands and companies to reevaluate their response to racism. One company being Madden NFL, the popular American football video game series that hasn’t featured Kaepernick in a game since 2016. The activist is the highest-rated free-agent quarterback in Madden 21, and gamers have the option to play him as a starter on any NFL team. His celebratory expression when scoring is a raised Black Power fist.

Madden’s decision to reintroduce Kaepernick as a player, and place him at such a high caliber, doesn’t quite align with the company’s previous stance on the former Super Bowl quarterback, which included completely removing him from the roster after becoming a free agent following the 2016 season. The player was not included in the group licensing agreement for Madden games between 2017 and 2019—a contract negotiated through the NFL.

In a new press release, the brand stated, “The team at EA SPORTS, along with millions of Madden NFL fans, want to see him back in our game… Knowing that our EA SPORTS experiences are platforms for players to create, we want to make Madden NFL a place that reflects Colin’s position and talent, rates him as a starting QB, and empowers our fans to express their hopes for the future of football. We’ve worked with Colin to make this possible, and we’re excited to bring it to all of you today.” The news came months after the company postponed the debut of the game—which was set to release back in May—after stating: “Our immediate attention is on actions we can take to drive change against the unjust treatment and systemic bias that is plaguing the nation and our world.”

Twitter users aren’t so accepting of the gesture, instead viewing Madden’s decision as performative action. Some even criticized the inaccurate high ranking that was appointed to Kaepernick, exceeding other notable players like Cam Newton and Kyler Murray. Others brought attention to Madden’s omission of Kaepernick’s name in two songs featured in Madden NFL 18 and Madden NFL 19, reminding gamers that Madden has not always publicly supported Kaepernick to this degree.

From being voted the most disliked player in the league in 2016, to receiving derogatory criticism from President Donald Trump and being ostracized by the NFL, Kaepernick has struggled to find a new team. Optimistically, Kaepernick’s decision to peacefully protest against police brutality swayed athletes across different sports to follow suit, especially during the social justice movement unfolding during the pandemic. It begs the question of whether the NFL’s newfound allyship is performative or genuine, considering that Kaepernick has yet to receive a public apology after his grievance and sign for the next season. Hopefully, this progressive initiative will lead to a fair contract for Kaepernick in the near future and continued activism.