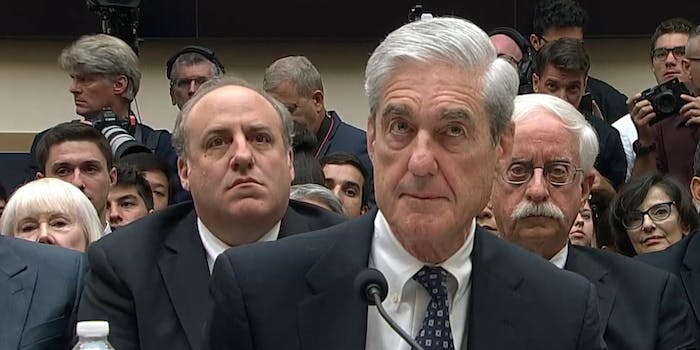 'Trimp' quickly became the center of a number of jokes on Twitter.

Special Counsel Robert Mueller is testifying before Congress today about his report on Russian interference in the 2016 election and potential obstruction of justice by President Donald Trump.

During the first round of testimony on Wednesday, Mueller was asked about the findings of his report by Rep. Zoe Lofgren (D-Calif.), specifically whether Russia believed it would benefit from one candidate winning the 2016 presidential election.

Mueller began answering the question, telling Lofgren that Trump was that candidate, but mistakenly pronounced the president’s last name, calling him “Trimp” before quickly correcting himself.

Rep. Zoe Lofgren: Did your investigation find that the Russian government perceived it would benefit from one of the candidates winning?

Lofgren: And which candidate would that be?

The mispronunciation was noticed by a lot of Twitter users, who found the “Trimp” name humorous.

Thank you Mr. Mueller, I will be enjoying the upcoming #Trimp memes. The internet is already on it.

#Mueller To summarize: Trimp was not exonerated.

If nothing else I would like to thank Robert Mueller for giving us a new nickname for the President:

Others vowed they’d refer to Trump as “Trimp” for now on.

He shall henceforth be known as #trimp

It’s perhaps unsurprising that that mispronunciation caught fire on Wednesday, as nearly every time Trump misspells something in a tweet, it starts trending.

You can watch all of Mueller’s testimony here.