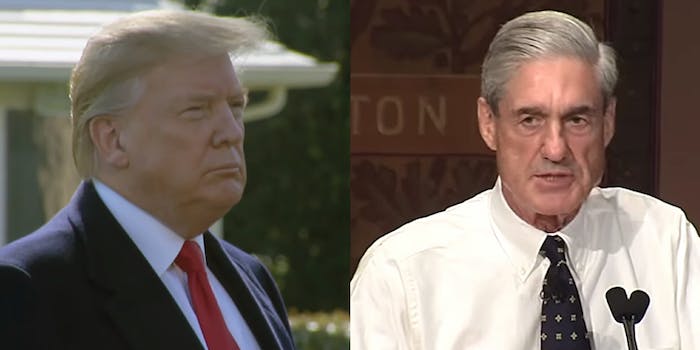 There's a lot to digest in here.

The report compiled by special counsel Robert Mueller was released publicly on Thursday, allowing a look at a years-long investigation that ranged from Russia’s interference in the 2016 presidential election to possible obstruction of justice by President Donald Trump.

Attorney General William Barr held a press conference early Thursday—ahead of the release of the report to Congress or the public—where he detailed that the Mueller report found there was “no collusion” between Trump’s campaign and Russia and included “episodes” of possible obstruction of justice.

Barr’s remarks were criticized as acting as a way to shape the narrative ahead of the release of the full Mueller report. At one point, Barr said he and Deputy Attorney General Rod Rosenstein disagreed with some of the legal theories presented by Mueller’s team regarding obstruction of justice.

The attorney general also said he did not have any objections with Mueller testifying before Congress. House Judiciary Committee Chairman Rep. Jerry Nadler (D-N.Y.) has sent a letter requesting Mueller testify before May 23.

After the press conference, Trump tweeted a Game of Thrones-style image with the words: “No collusion. No obstruction. For the haters and the radical left Democrats–Game Over.”

Here are some of the highlights from the Mueller Report:

As expected, the investigation confirms that the Russian government “interfered in the 2016 presidential election in sweeping and systematic fashion.”

The report also states definitively that investigators could “not establish that members of the Trump Campaign conspired or coordinated with the Russian government in its election interference activities.”

2) No determination on obstruction of justice, but no exoneration

The report, again as expected, does not make a determination as to whether Trump tried to obstruct justice amid the Russia investigation.

The Mueller report details numerous instances of Trump trying to get members of his administration to try and curtail the investigation.

In May 2017, after Mueller was appointed as the special counsel, Trump was meeting with officials and—according to notes taken—slumped in his chair and said “Oh my god. This is terrible. This is the end of my presidency. I’m fucked,” before lashing out at former Attorney General Jeff Sessions.

Trump, according to the report, called former White House counsel Don McGahn at his home in June 2017 and “directed” him to call the acting attorney general and tell him the special counsel’s office had conflicts of interest and should be removed.

McGahn did not adhere to Trump’s wishes.

“McGahn did not carry out the direction, however, deciding that he would resign rather than trigger what he regarded as a potential Saturday Night Massacre,” the report reads.

The report also details a conversation the president had with former campaign manager Corey Lewandowski. According to Mueller’s team, Trump asked him to ask Sessions to “publicly announce” that the special counsel investigation was “very unfair” to Trump.

Ultimately, Lewandowski asked Rick Dearborn, a White House official, to tell Sessions about Trump’s request, but he felt “uncomfortable” doing so and did not “follow through.”

Trump also spoke with a number of administration officials, including Steve Bannon, about what he believed were conflicts of interests with Mueller.

Bannon called one of Trump’s assertions of a conflict—that Mueller had disputed fees regarding his membership at a Trump golf course—would be “ridiculous and petty” to bring up.

“The president’s efforts to influence the investigation were mostly unsuccessful, but that is largely because the persons who surrounded the president declined to carry out orders or accede to his requests,” the report reads.

The Mueller report also addressed the written responses that Trump and his personal counsel gave them in response to questions, calling them “inadequate.”

The report says in December 2017 they began trying to secure an interview with Trump regarding Russian election interference and obstruction of justice and received written responses in November 2018. Those responses, according to the special counsel, included “on more than 30 occasions that he ‘does not recall’ or ‘remember’ or have an ‘independent recollection'” of information they sought with the questions.

There was consideration of subpoenaing Trump’s testimony, the report reads, but they ultimately decided against it as they “weighted the costs of potentially lengthy constitutional litigation, with resulting delay in finishing our investigation, against the anticipated benefits for our investigation and report.”

The questions focused on the Trump Tower meeting, Russian hacking and election interference, the Trump Tower Moscow project, and contacts with Russia during the campaign.

5) Mueller’s team made 14 referrals to other jurisdictions

At the end of the report, the report lists 14 instances where it identified “evidence of potential criminal activity that was outside the scope of the Special Counsel’s jurisdiction.”

Of the 14 referrals, only two are not redacted. The Special Counsel said it found “evidence of potential wire fraud and FECA violations pertaining to Michael Cohen” and “potential FARA violations” pertaining to Gregory Craig, a White House counsel during former President Barack Obama’s term in office.

Both of those have already been made public.