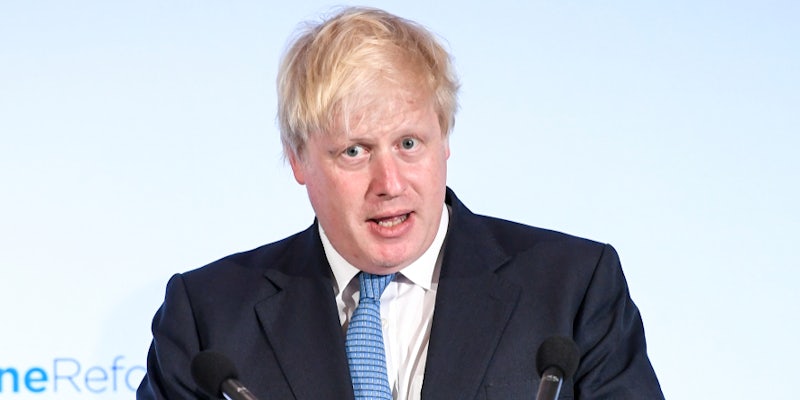 Well, it finally happened. Boris Johnson was elected UK’s prime minister on Tuesday, replacing Theresa May. The conservative politician, who previously served as foreign secretary and mayor of London, is a strong advocate of Brexit. On Twitter, people are reacting to the announcement with memes.

Breaking: universe reacts to news that Boris Johnson is to be Prime Minister. pic.twitter.com/AQkP304TPb

Boris Johnson is REALLY about to be the next Prime Minister? #NotMyPM pic.twitter.com/UO17zIs4I8

Some of them got personal.

The Conservative Party: We hereby elect Boris Johnson as leader and Britain's next Prime Minister

With a great take on Johnson’s own reaction to the news.

And, of course, people are sharing Simpsons memes. Can’t ignore the classics.

the results of the tory leadership contest are in pic.twitter.com/YIHYFPOp7B

Ireland Simpsons Fans, who tweet a lot about Brexit, had one of their own.

As well as this Beetlejuice reference.

Despair is another big focal point of these memes.

so boris johnson is pm? pic.twitter.com/L23lSOvAaV

And some of us are feeling a tad nervous.

The majority of the uk rn #borisjohnson pic.twitter.com/daW4MJaGDM

It’s time to fight against Boris Johnson’s plans for the NHS! Don’t let him get away with it! pic.twitter.com/tWl7NSQPLo

Looks like Larry’s not overly thrilled about his new owner, either.

Twitter user @DaleksGamertag, who apparently dances to political events, had to make one for this.

The comparisons between Donald Trump and Boris Johnson kicked off almost immediately after the news was announced.

The UK: at least *Boris Johnson
we don’t have is UK next
Donald Trump Prime Minister*
The UK:#NextPrimeMinister pic.twitter.com/vVd3ojHjPN

And there were quite a few “clown” memes.

Clowns to the left of me, jokers to the right, here I am. pic.twitter.com/itXctJehgT

donald trump and boris johnson brain storming ideas on how to bring back slavery pic.twitter.com/t6sPw0Cf5j

Boris Johnson will be the next British Prime Minister. The world is now ruled by two men with rotten hearts and heinous hair. pic.twitter.com/gTsvNfW2Pt

Poor Boris is apparently not off to a great start.

The face you make when your deal is rejected within 1 hour of becoming prime minister #BorisJohnson #Brexit pic.twitter.com/SeJghCvuNG

Meanwhile, as one person pointed out, “British politics is about to get a hell of a lot more entertaining.”

Boris Johnson to be the new UK Prime minister.
British politics is about to get a hell of a lot more entertaining. pic.twitter.com/I2JMMtHdcK