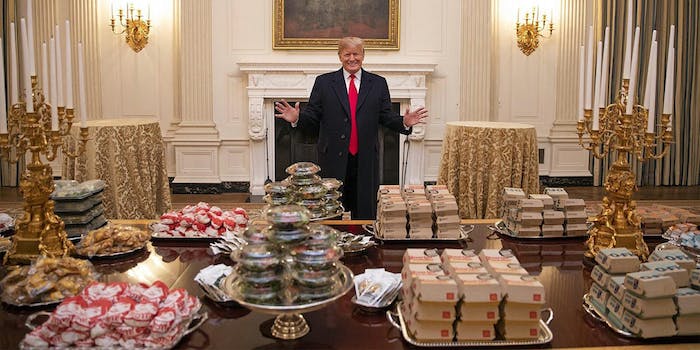 President Donald Trump on Monday set Twitter ablaze by bringing a spread of fast food into the White House, to serve to the Clemson Tigers, during their visit for winning this year’s college football championship. But even that has become mired in mistruths and bizarre memes.

On Twitter this morning, Trump announced that he paid for 1,000 hamburgers for the team.

Or as he calls them, “hamberders.”

If there are two things the president is known for its hyperbolic, factually curious boasting and Twitter typos. “Hamberders” aside, Trump initially claimed he bought 300 burgers for the Tigers. From the White House pool report:

“If it’s American, I like it. It’s all American stuff. … But it’s good stuff and we have the national champion team, as you know, Clemson Tigers. And they had a fantastic game against Alabama and they’re all here. They’re right outside the room and I think we’re going to let you see them. But I’ll bet you, as much food as we have — we have pizzas, we have 300 hamburgers, many, many french fries, all of our favorite foods.”

Regardless, the reaction to the scene in the White House last night was noisy, with people appalled by the juxtaposition of McDonald’s Sweet and Sour sauce sitting in fine silver bowls, and Trump standing beneath a portrait of Abraham Lincoln.

“This is the news photo that would make a returning time traveler realize they fucked something up,” TV writer Jess Dweck tweeted.

This is the news photo that would make a returning time traveler realize they fucked something up pic.twitter.com/DwKe35Uicm

But Trump, who loves fast food, seemed to be having the time of his life.

“If it’s American I like it. It’s all American stuff,” Trump says, of table piled with burgers from McD's, Wendy’s, and Burger King. Another held Domino's and fries, per pool.

Trump’s celebration of football and gluttony was mocked Tuesday morning, mainly for his failure to properly spell a classic American food. And for letting the world know he paid.

I paid for the hamberders. It was me, the billionaire https://t.co/pm3eetWYli

Fifteen minutes later, "hamberders" is still up. At what point do we acknowledge the fact that Trump is almost certainly dyslexic but too insecure to admit it. https://t.co/LsNeveYuwD

I, a billionaire, paid for the hamberders one hour https://t.co/uGvUk2dHuT