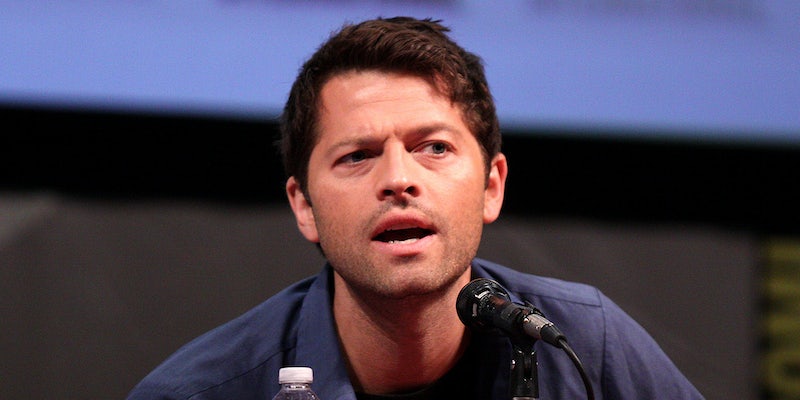 ‘I happen to be straight’: ‘Supernatural’ star Misha Collins corrects the record on his sexuality

Thanks to Supernatural's reputation for queerbaiting and online chaos, this announcement was met by widespread hilarity.

When actor Misha Collins seemingly came out as bisexual this weekend, it caused untold chaos in Supernatural fandom and its environs. That chaos was only compounded when he clarified on Monday that he is, in fact, straight.

The initial not-actually-coming-out statement occurred at a Supernatural fan convention, where Collins asked the audience: “How many of you would consider yourself introverts? How many extroverts? And how many bisexuals?”

As the crowd cheered, he added, “I’m all three.” His meaning seemed pretty clear, and there was no reason to think he was joking.

To many fans, the timing of this announcement made perfect sense. Supernatural concluded 18 months ago, and coming out during the show’s run would’ve been a high-pressure announcement, overlapping with the intense attention paid to his character, Castiel. In the final episodes, Castiel confessed his love to the show’s co-protagonist Dean Winchester but was then swiftly (and infamously) killed off. You can see why Collins might choose to wait a while before coming out. But as Collins clarified in a series of awkward tweets, this whole situation was a misunderstanding.

“My clumsy intention was to wave off actually discussing my sexuality, but I badly fumbled that and understand that was seen as me coming out as bisexual,” he tweeted. “This was not my intention so I need to correct the record: I am not bisexual. I happen to be straight, but I am also a fierce ally and the last thing I want to do is falsely co-opt the struggles of the LGBTQIA+ community.”

For another B-list celebrity, this would be an embarrassing but forgettable misunderstanding. But thanks to the cultural legacy of Supernatural, Collins’ clarification was met by widespread hilarity.

“Misha Collins comes out as straight” literally sounds like a Tumblr shitpost prediction, and it followed a notorious trend for absurd Supernatural events coinciding with major breaking news stories—in this case, Elon Musk’s acquisition of Twitter. (Back in 2020, Castiel’s coming-out/death episode coincided with the U.S. election and headlines about Vladimir Putin’s supposed retirement.)

In 2022, “Supernatural fandom” doesn’t mean the same thing it did 10 years ago, when the show was a dominant presence on Tumblr. Supernatural obviously retains an active fanbase, but many of the people reacting to this Misha Collins news either left the fandom years ago, or were never Supernatural fans in the first place. They just view Supernatural fandom as a kind of spectator sport because the show and its cast have such an unerring talent for causing chaos online.

Collins’ reverse-coming-out is a particular source of hilarity due to Supernatural‘s reputation for queerbaiting, specifically around Castiel and Dean. In the words of one viral response to Collins’ announcement, this week’s news cycle was “one last queerbait for old times sake.”

Based on previous events, we estimate that Supernatural‘s next ridiculous micro-scandal will happen in three to six months. Congratulations and/or commiserations to all involved.