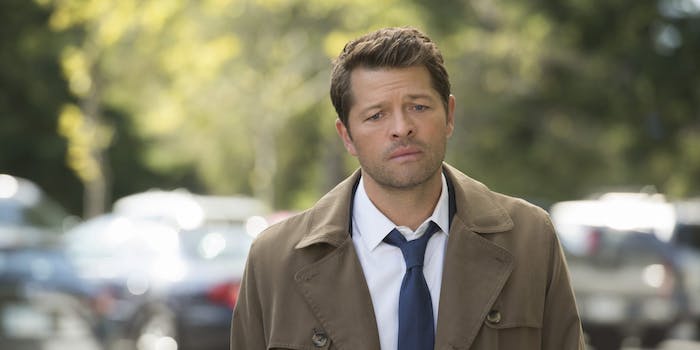 On Thursday night, the CW network inserted a stick blender into the internet’s cranial cavity and flipped the switch. After 15 years on air, the TV show Supernatural finally made Destiel canon. In turn, this caused an avalanche of cathartic hysteria that (based on Twitter’s trending topics, at least) overshadowed President Donald Trump’s disastrous press conference and the news of Vladimir Putin’s impending retirement (which the Kremlin has since denied). Was tweeting about Supernatural a “good” use of anyone’s time? No. Never. But in an emotional sense… maybe yes? Our brains are mush. This is what we deserve.

Destiel (aka the romantic pairing of monster hunter Dean Winchester and the angel Castiel) is arguably patient zero for fandom queerbaiting discourse. Ever since the show introduced Castiel in season 4 (2008), Supernatural fans have shipped him with Dean, making them one of the most popular pairings on Tumblr for the past decade. And while Supernatural is no longer the ubiquitous presence it was 10 years ago, the culture remembers. So when the show made Castiel confess his love for Dean two episodes away from the series finale, the internet lost its collective mind. It didn’t matter if you hadn’t watched the show in years. It didn’t matter if you’d never watched the show. If you were remotely fandom-adjacent or had a Tumblr account in the early 2010s, the phrase “Destiel is canon” arrived like a baseball bat to the face. Crucially, this all unfolded after the 2020 election had obliterated everyone’s emotional defenses.

I haven’t watched the last seven or eight seasons of Supernatural, so if you want informed analysis, you’ll have to go elsewhere. The thought of providing serious context makes me lose my remaining brain cells, for reasons that will soon become clear. Rather than watching the actual episode, most people are just reacting to this clip of Castiel confessing his love to Dean, which is hilarious for a number of reasons: the strained acting, the low production values, and most importantly, the fact that Castiel dies instantly after the confession. He literally admits that he loves another man, then gets sucked into a hellish vortex! Does Dean reciprocate? No! Do the characters kiss? Hell no! Is there still time for Supernatural to walk this confession back into the no-homo zone? Absolutely yes.

Objectively speaking, this is the funniest possible resolution to the last 10+ years of Supernatural, piling insult upon injury toward queer viewers and Destiel shippers. That scene is like a homophobic trope speed-run, graduating from queerbaiting to “bury your gays” in a matter of seconds. Love wins! Plus, the timing was incredible. This absurd denouement arrived in the midst of arguably the most chaotic and traumatizing news cycle of our lives.

The reaction tweets are truly a goldmine, a whirlwind of disbelieving anti-nostalgia for the cringeworthy heights of the SuperWhoLock era.

In fact, many social media users joked that they inadvertently learned of Putin’s alleged retirement plans via Destiel memes.

The most terrifying detail here is that there are still two more episodes of Supernatural left to air. Godspeed, Destiel. It’s been real.