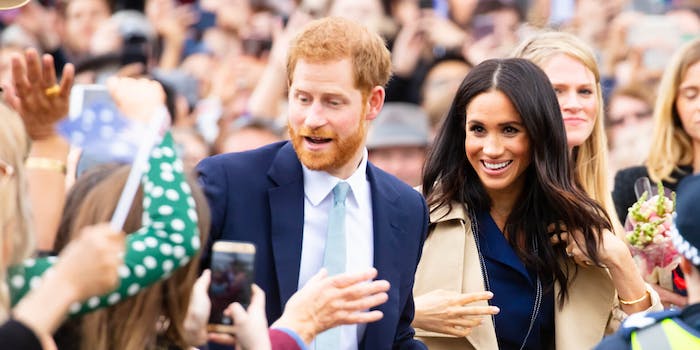 'Meghan and Harry gonna taste NYC rent and move back.'

Prince Harry and Meghan Markle announced Wednesday that they are stepping back from their duties in the royal family.

The Duke and Duchess of Sussex announced their intentions through an Instagram post. In the post, the couple revealed that they plan to step back as “senior” members of the royal family. They intend to become “financially independent” and to “balance” their time between the U.S. and the U.K. People all over the globe communicated their shock at the news through memes because, apparently, that’s how we handle our emotions in 2020.

“After many months of reflection and internal discussions, we have chosen to make a transition this year in starting to carve out a progressive new role within this institution. We intend to step back as ‘senior’ members of the Royal Family and work to become financially independent, while continuing to fully support Her Majesty The Queen. It is with your encouragement, particularly over the last few years, that we feel prepared to make this adjustment. We now plan to balance our time between the United Kingdom and North America, continuing to honour our duty to The Queen, the Commonwealth, and our patronages. This geographic balance will enable us to raise our son with an appreciation for the royal tradition into which he was born, while also providing our family with the space to focus on the next chapter, including the launch of our new charitable entity. We look forward to sharing the full details of this exciting next step in due course, as we continue to collaborate with Her Majesty The Queen, The Prince of Wales, The Duke of Cambridge and all relevant parties. Until then, please accept our deepest thanks for your continued support.” – The Duke and Duchess of Sussex For more information, please visit sussexroyal.com (link in bio) Image © PA

The memes quickly started flooding in, from both fans and critics of the royal couple. Supporters of the move congratulated the duo for “leaving that dusty palace.”

Meghan and Prince Harry walking out the palace like… pic.twitter.com/eG570Unr3c

Some people amused themselves by imagining Harry taking on the regular tasks that non-royals tackle every day. Doing laundry, cooking his own meals, and even paying taxes could be jarring to the 35-year-old prince. “Meghan and Harry gonna taste NYC rent and move back,” one person wrote.

a sitcom where Meghan teaches Harry how to do workforce things such as using Turbotax & meal prepping & filling out a W-1, please

meghan and harry gonna taste NYC rent and move back

In a few weeks Harry will be walking out of Costco like this…#HarryandMeghan pic.twitter.com/X3f9wHGLyA

Meghan and Harry should get a Patreon

Other memes poked fun at the press and British public for their outrage over the announcement. “If you’re angry about #HarryandMeghan but said nothing about #PrinceAndrew, re-evaluate your prejudices,” one user wrote.

Also: if you’re angry about #HarryandMeghan but said nothing about #PrinceAndrew, re-evaluate your prejudices.

Harry: *has been treated like the black sheep his whole life*

Meghan: *been the subject of racist & sexist abuse since she arrived*

The Public: “WE DONT WANT OUR TAX MONEY GOING TO THEM!”#HarryandMeghan : Ok that’s it we’re off. Had enough of this shit.

British public: weLL IF MEGHAN AND HARRY don't like beiNG IN the PUBLIC EYE they should STEP BACK

*Meghan and Harry step back*

More than anything, people were overjoyed to hear of the couple’s decision. “The Meghan and Harry story is great because it’s like a reverse Aladdin where the prince marries a commoner who rescues him from his castle,” one Twitter user wrote.

The Meghan and Harry story is great because it’s like a reverse Aladdin where the prince marries a commoner who rescues him from his castle.

It’s rare I defend Royals, but the reaction to Harry and Meghan coming to their senses is ludicrous.

All I see is a fundamentally decent lad trying to protect his family from some of the nastiest shit that Britain has to offer, and if he was my son, I would be proud of him.

Twitter was so bad until Meghan and Harry quit their family and now it’s so good!! This was the emotional support golden retriever we all needed pic.twitter.com/S2ogYh5tVm

All Americans rn re: Meghan Markle and Harry pic.twitter.com/MRidrfx3GY

As of press time, many on Twitter were still mocking the royal family.