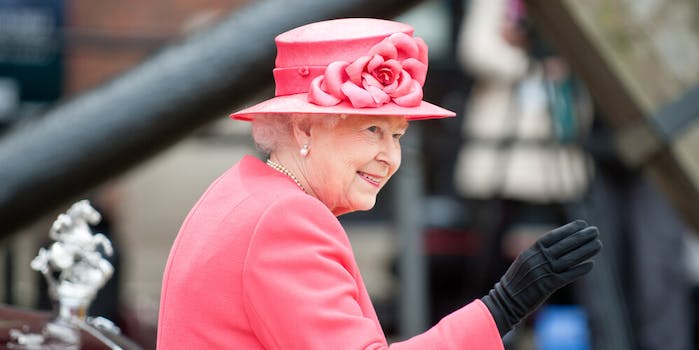 The rumors of her death have been greatly exaggerated.

Last night, Twitter was sent into a Royal Family frenzy after an unknown person going by Gibbo in a group chat told his mates that the Queen of England had died. Though the Queen’s continued survival was reported first thing in the morning by a Buckingham Palace spokesperson, this came far too late to stop Queen, #thequeenisdead, Buckingham Palace, Prince Charles, and other Royal Family keywords from trending all night long.

Apparently the queen is dead. pic.twitter.com/quYoizOwlh

I see we have reached that time of year where I have to dispel rumours of HM's passing.

The Queen is not dead. She is alive & well and is very much looking forward to hosting President Trump and other world leaders at Buckingham Palace on Tuesday for the NATO reception.

“I see we have reached that time of year where I have to dispel rumours of HM’s passing,” said Royal Central EIC Charlie Proctor in a tweet. “The Queen is not dead. She is alive & well and is very much looking forward to hosting President Trump and other world leaders at Buckingham Palace on Tuesday for the NATO reception.”

Saying that the Queen had “passed away this morning, heart attack” and that it would be announced at 9:30am the next day, the mysterious Gibbo claims his information came right from a Queens Guards WhatsApp chat.

Gibbo’s friends were, of course, skeptical of this, as someone prematurely reports the Queen’s death on Twitter roughly every half hour.

Another group member going by “Ricey” also claims to have a contact in the Guards, and promised to report back to confirm whether the Queen was actually dead or Gibbo was just full of it. Unfortunately, the internet will never know the outcome of that (unless Gibbo, Ricey and the lads take pity on us and release the rest of the chat) as the person responsible for introducing the screenshot to Twitter in the first place, user @Swanny532, is not only not a part of the group chat but told the Daily Dot that he doesn’t even remember where he found it in the first place, going on record saying, “Sorry about that.”

Fuck #Gibbo , it's all about #Ricey . Did your mate message back or not?!

Gibbo and the lad’s identity is a source of fascination for much of Twitter, with his name trending last night alongside all the Queen tags.

despite this year being wank, a bloke called gibbo managed to convince the world the queen had died. it will go down in history on this app

#Gibbo this morning when the queen is in fact not dead, and the government is onto him pic.twitter.com/EEI0mbvVJX

With speculation on how he’s going to live it down now that everyone knows the Queen is very much alive.

So, the burning smell yesterday was Gibbo's pants. #queendead

Conspiracy theories were born, including that Gibbo is actually the Queen trying to fake her own death so she doesn’t have to host Trump this week.

In her defence, I'd fake my death too if I knew Donald Trump wanted to visit me. #Gibbo

Has anyone considered that #Gibbo could have been Her Madge so she didn’t have to speak to Trump this week?

And that the whole thing was a Tory ploy to distract people in the upcoming election.

If the queen isn’t dead, what if the current government leaked that picture to distract the younger generations from the election as the older generations don’t use twitter as much as the younger ? #queendead #Queen

And that if the Queen had actually died, the palace would never admit it.

It probably has just happened, and now palace officials have the job of keeping the real Queen on ice for 6 months while a body double stands in, just to pretend it didn’t.

Despite the morning announcement that the Queen was very much alive, the hashtag #queendead is still trending and shows no signs of dying down any time soon.

The Queen is definitely not dead, I just saw her pick up her copy of the new Sisters of Battle boxed set at my local Warhammer store. #queendead #sistersofbattle #gamesworkshop pic.twitter.com/dHU450RJRB