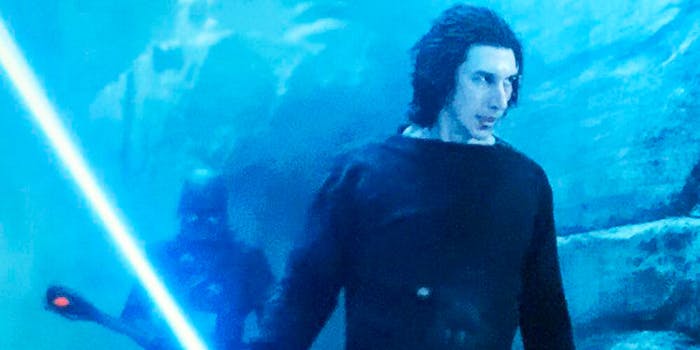 With the Ben Solo Challenge, anything is a lightsaber

People are using baguettes and umbrellas.

There’s been no shortage of memes since the release of Star Wars: The Rise of Skywalker late last year, from roasting J.J. Abrams to celebrating Babu Frik—not to mention the proliferation of Star Wars memes on TikTok. And now the final film of the space-opera trilogy has inspired its own viral competition: the Ben Solo Challenge.

Those who have seen The Rise of Skywalker (and for those who have not, spoilers ahead) know that near the end of the film, Kylo Ren reclaims his true heritage as Ben Solo, who then follows Rey to Exegol where she’s about to face off with Palpatine. When he arrives, Ben encounters the Knights of Ren. However, his former army of henchmen is more than a bit surprised when, from behind his back, Ben pulls out a blue Jedi lightsaber instead of one of the red lightsabers used by the Sith.

In response, Ben offers a halfhearted shrug, as if to say, “deal with it.” Really, all that’s missing is a pair of black pixelated sunglasses to drop down over his face. (Surely there was room in the CGI budget for this?)

My news years resolution is to master the Ben Solo shrug #trosspoilers pic.twitter.com/N2JTf10iY1

At any rate, we all know what happens next. Boy saves the girl, girl kisses boy, and then boy evaporates into thin air. Like all the good ones do!

It’s this climactic moment that was the inspiration for the Ben Solo Challenge, which picked up steam this week after Twitter user @testtube27 tweeted out a video of himself pulling out a lightsaber and shrugging. “I now present the #BenSoloChallenge,” he wrote.

“I expect to see people pulling baguettes and umbrellas from behind their backs,” Mike added in a subsequent tweet. “Don’t let me down.”

This being the internet, people did not let him down. Star Wars fans responded in droves to the Ben Solo Challenge, using everything from fly swatters and beverages to baguettes and umbrellas—exactly as instructed!

Clearly I couldn't wait until I got home from work for this. #BenSoloChallenge
@testtube27 pic.twitter.com/X8EqA30y0l

And then there was this guy who used the hammer of Thor, which is fine because it’s all owned by Disney now, anyway.

There were also plenty of people of all ages who just used actual toy lightsabers to participate in the Ben Solo Challenge.

wanted to do a version of the #BenSoloChallenge that’s closer to adam’s ta-da motion than a proper shrug pic.twitter.com/dPvF39IfLN

The #BenSoloChallenge from a tiny sick Ben Solo who wanted to join in. pic.twitter.com/9kISmcVdBR

At first I thought, "I'm too old/fat/ugly/boring/etc" to join the #BenSoloChallenge, and then I did it anyway, because Star Wars fandom is for everyone and it's about time I acknowledged that means me, too. pic.twitter.com/ihyGfngEah

#bensolochallenge This is so much fun! I want to see as many of these from as many people as possible! (Credit to @testtube27 for starting this whole thing) pic.twitter.com/GLdmCafpR6

But perhaps no one—and we mean nobody—does the Ben Solo Challenge better than Han Solo himself.

Cut from the same cloth, they are?