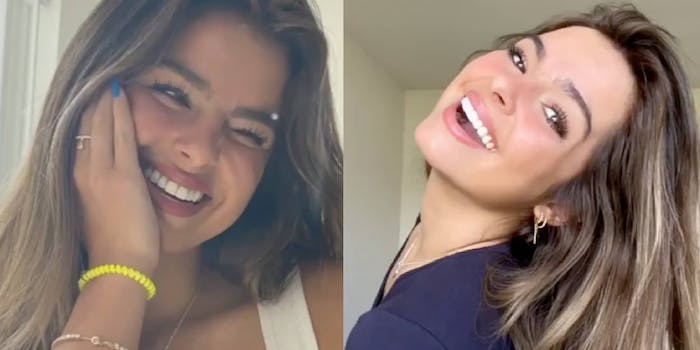 The 20-year-old influencer is the platform's latest breakout sensation.

With graduation, prom, and sporting events canceled, many teenagers are seeking comfort in the short-form video-sharing app TikTok. And a new name has recently skyrocketed to the height of TikTok popularity: Addison Rae.

Here’s everything you need to know about TikTok’s hottest new star—who recently left college to see what those billion (?!) likes can do for her IRL.

Who is Addison Rae?

Addison Rae is a 20-year-old influencer from Baton Rouge, Louisiana. She’s been on TikTok since July 2019 when she first downloaded the app. Within just a few months, Rae had gained 1 million TikTok followers. In the eight months since her first video posted, she has become a staple of the platform. Her follower count now sits at just over 30 million, and her content has earned more than 1.3 billion likes.

Some of the 20-year-old’s most popular TikToks just feature her goofing around with her siblings or dancing to popular songs.

Occassionally, Rae makes sure to take part in trends and viral challenges. More often than not, however, her charming style and relatable humor seem to attract people to her page.

At around the same time she was first reaching viral fame, Rae started college at Louisiana State University. Those college days are already behind her, however, after she decided to “resign”—as she put it in a video with James Charles—from university to pursue “other dreams.” Now Rae is creating content full-time, from her place as a member of the Hype House.

What is the Hype House?

Hype House is essentially TikTok’s answer to YouTube group houses like Team 10. A hub for specific creators to work from, the physical house is located in Los Angeles. The group currently has 19 members, but only four of them live at the house full-time. It’s an incubator, but for aspiring famous people.

Rae moved out to L.A. in December to dedicate herself full-time to creating content online. Hype House currently boasts nearly 3.5 million Instagram followers and 13.4 million followers on TikTok. The group of young creators get together to collaborate on videos, workshop content, and boost one another’s online reach.

Despite shifting her focus to more group videos, Rae continues to put out family-oriented content. Even some of her Hype House videos feature her mother, a dominant presence in her solo videos.

Rae isn’t the only TikTok-famous member of her family. Both of her parents also have accounts on the platform, and while neither can boast Rae’s follower count, their numbers are nothing to be scoffed at.

Her father, Monty Lopez, has 1.5 million TikTok followers, and his page has earned 28 million likes. Both parents upload charming videos of themselves dancing, going about daily tasks, and having fun with their kids.

Rae’s little brother Enzo even has a TikTok page, which has 300,700 followers and more than 2.5 million likes.

With star power comes enhanced visibility, which inevitably leads to heaps of gossip. The most pervasive rumor revolving around Rae involves her relationship with fellow TikTokker Bryce Hall. The two met when Rae visited Los Angeles in 2019. Since then, Hall has been a frequent presence in her videos.

In an interview with Entertainment Tonight, Rae emphasized that the two are “super good friends.”

“Right now I think we’re better off as friends and we both mutually decided that,” Rae said. “We love each other so much and we love being around each other and we’re super good friends, for now, it’s best that we stay that way.”