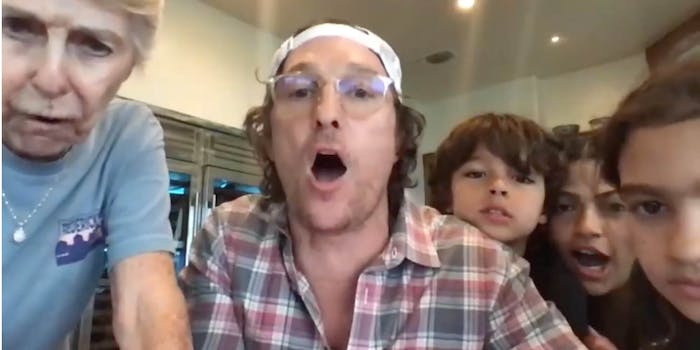 The Enclave at Round Rock Senior Living/Facebook

Over the weekend, Matthew McConaughey hosted virtual bingo with the isolated members of a senior citizen’s home in Round Rock, Texas.

The 50-year-old actor first got the request to host a bingo night for the Enclave at Round Rock Senior Living back in September. His schedule, at that point, didn’t have room for the request. But coronavirus isolation gave us at least one good thing, in that it provided an opening in McConaughey’s schedule. He logged on to call out the numbers along with his mother, wife Camila, and three children.

Whenever a bingo was called, the prize—rather than the typical monetary pay-off—was to ask McConaughey a question. The facility shared a short video of the event, in which McConaughey and his family can be seen cheerfully interacting with members of the home.

“The residents absolutely loved seeing Matthew and his family and enjoyed hearing him talk about what he’s doing to get through this crisis,” she said, according to NME. “It gave them hope and was the boost that they needed to get through this lonely, challenging time.”

In a post to the facility’s Facebook page, employees and members of the community thanked McConaughey for taking the time.

“During a time when we are all working to make lemonade out of lemons, we are so humbled that Matthew took the time to play our favorite game with us.”