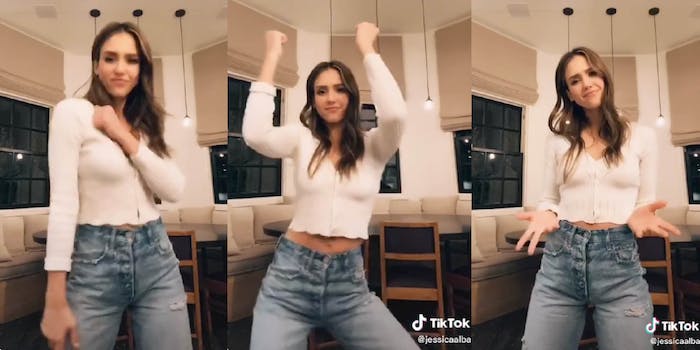 The “Savage” TikTok challenge—born during the pandemic—has swept the internet. From tweens to twerking grandmas, people of all ages are trying their hand at it.

Even Jessica Alba uploaded her own savage moves to the short-form video app.

In the now-viral video, the Honey actress wears tight, high-waisted jeans and a white crop-top sweater that shows off her fit physique. She is seen swinging her hips and even adds a sexy hip roll into the mix.

Alba’s video even caught the eye of “Savage” rapper Megan Thee Stallion, who took the time to give her a shout-out.

“Hot girl Jessica checking in,” she wrote, along with fire emojis.

On Twitter—where the video was reposted, leading Alba to trend—many fans commended the 38-year-old mother of three, claiming she channeled her inner Honey Daniels.

Other fans shared their infatuation and praised the mogul’s ageless beauty.

“I think my girl crush on @jessicaalba got worse after I saw how cute she is on Tik Tok….” one fan gushed.

But of course there were some haters in the mix.

“That Jessica Alba tik tok can’t be the same Honey Daniels from the Jadakiss video,” one fan stated, referring to a scene from Honey.

Others were just happy to learn that Alba did not have the coronavirus after seeing her name trending.

“Y’all,I saw Jessica Alba trending and thought she was part of Miss. Rona’s body count. Turns out she’s just on Tik Tok,donating and running a billion dollar company. As you should,Queen,” an endearing fan wrote.