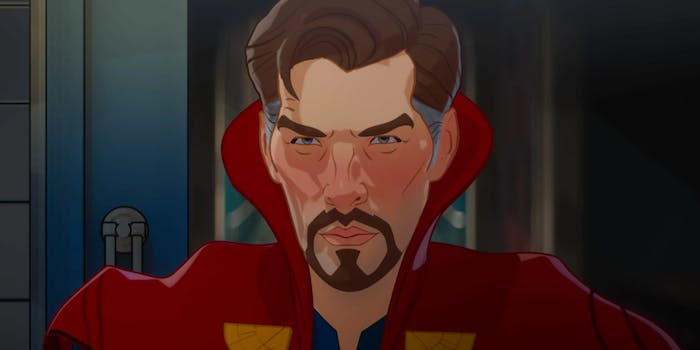 ‘What If…?’ episode 4 highlights the flaws of ‘Doctor Strange’

Remixing Doctor Strange‘s origin story, What If‘s fourth episode should’ve ventured further from its source material. Episodes one and two highlighted what we love about popular MCU characters and movies, but things are a little different for Doctor Strange, one of the lesser narratives in the franchise. The film’s main strength was visual effects, while Stephen Strange himself fares better as a side character elsewhere. So why not push the envelope a little further in his What If reboot?

In this universe, Strange “lost his heart instead of his hands,” his heart meaning Christine, whose death precipitates Strange’s journey to becoming the Sorcerer Supreme. Determined to change the past and bring Christine back to life, Strange turns to dark magic. After centuries of siphoning power from interdimensional monsters, he ultimately destroys his own universe. In other words, Christine gets a classic “women in refrigerators” role, dying to motivate Strange’s fall from grace. (In the movie, she was such a nonentity that she essentially vanished from the story halfway through.)

Written by the show’s creator A.C. Bradley, this idea plays into Doctor Strange’s role as one of the (intentionally) less likable heroes in the MCU. Stephen Strange is an asshole, and you can easily imagine him doing a heel turn like this one. It’s precisely the kind of thought experiment that What If thrives upon, but it suffers from an overabundance of respect for the movie. The pervasive orientalism remains intact, including Tilda Swinton reprising her much-criticized role as the Ancient One, a character who was Asian in the comics.

Despite producer Kevin Feige publicly admitting that casting Swinton was a mistake, she returns unchanged, toting a pair of magical fans and wearing the same East Asian-inspired costume. She’s here to deliver expository warnings, while Strange relies on support from his sidekick Wong (Benedict Wong) and the mystical librarian O’Bengh (Ike Amadi). Just like in the movie, this format presents Strange as an arrogant American interloper who seeks knowledge from people of color, then quickly outshines them through his own force of will. Wong and O’Bengh are enigmatic and self-sacrificing, perishing in the service of Strange’s quest.

In the comics, writers often use this kind of one-off story to critique the flaws of earlier canon. That’s arguably what we saw in What If‘s first two episodes, exploring a female-led Captain America story, and a universe where T’Challa (charismatic and ethical) replaced the self-absorbed Peter Quill in Guardians of the Galaxy. These stories paid homage to previous canon while still having something interesting to say, which episode 4 clearly does not. It’s visibly uninterested in tackling the central problems of Doctor Strange, suggesting that Marvel still doesn’t want to admit those problems exist.