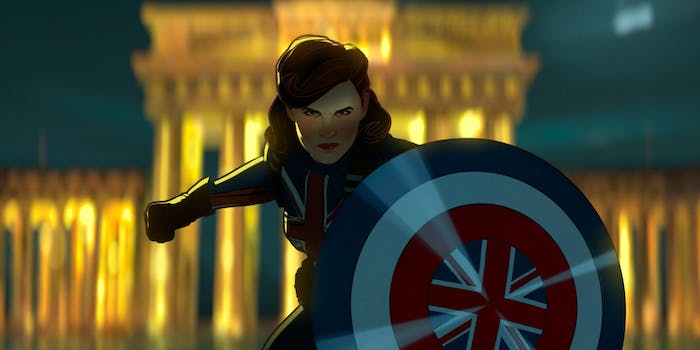 Recap: Marvel’s ‘What If…?’ introduces Captain Peggy Carter in episode 1

The MCU's animated anthology series gets off to an exciting start with this Peggy-centric episode.

Marvel‘s What If…? begins on a very welcome note, introducing an alternate-history adventure starring Peggy Carter (Hayley Atwell). Peggy’s movieverse finale in Avengers: Endgame caused some consternation among her fans, erasing her quasi-canonical adventures in Agent Carter, and positioning her as Captain America’s happily-ever-after love interest. This new story turns the tables, envisioning a world where Peggy received the supersoldier serum instead of Steve Rogers.

Each What If…? episode tells a one-off story in an alternate timeline, although Marvel has already confirmed that Captain Carter will return in future seasons. You can easily understand why. Peggy is a charming, dynamic character, and she translates well to the animated format. As I said in my spoiler-free review of the first three episodes, some of the MCU’s big-name stars just aren’t suited to voice acting. But Atwell does a good job, and the 1940s setting allows for a familiar (but not over-used) callback to the MCU’s Phase 1.

This episode sticks close to the plot of Captain America: The First Avenger, branching away from the MCU timeline when Steve was meant to become a supersoldier. Thanks to Hydra sabotage, Steve gets shot and Peggy is the only person willing to replace him in the Vita-Ray machine, gaining pounds of muscle and at least a foot in height. However, the U.S. military is not happy that their expensive experiment was wasted on a woman. Bradley Whitford reprises his Agent Carter role as her boss John Flynn: a misogynist asshole who sneeringly dismisses Peggy’s desire to fight on the front lines. Steve Rogers (still in his skinny, asthmatic original body) is more supportive, inspiring Peggy to don a Captain Britain costume and jet off to Europe to save Bucky Barnes from Hydra, just like in the movie.

I was interested to note that while most of the main characters are designed to resemble the live-action actors, the show opts for a different look when they’re voiced by someone else. So Peggy and Howard look like Hayley Atwell and Dominic Cooper, while the Red Skull (no longer played by Hugo Weaving) has more generic facial features. The same goes for Black Widow in later episodes, since Scarlett Johansson didn’t reprise her role. And by keeping Steve Rogers in his original body, this episode avoids any visual callbacks to Chris Evans. Presumably, these actors didn’t give permission to use their likeness when they’re not actually involved in the production.

Peggy and Steve’s relationship is among the most gratifying elements of the Captain Carter story, putting Steve in the love-interest role while Peggy is the hero. This reframing emphasizes the fact that Steve’s muscular makeover—so often ogled by the live-action movies—is immaterial to their relationship. Steve and Peggy already liked each other before his transformation, sharing similar values and bonding over their underdog status. This reboot subverts the typical superhero/girlfriend gender roles, not least by having Peggy be twice Steve’s physical size. Steve also gives Peggy pep-talks and cheers her on from the sidelines—although the show can’t resist getting him into battle as well, donning an Iron Man-style suit built by Howard Stark. Instead of crashing a plane into the Arctic ice, the episode ends with Peggy battling a tentacle monster summoned by the Red Skull, stepping through a portal to arrive in the present day.

Will Steve still be around in the 21st century, like Peggy was in Captain America: The Winter Soldier? Rationally speaking, it seems unlikely given his numerous health problems. But this is a superhero cartoon. If Marvel wants Steve to return for next season’s Captain Carter adventure, they’ll find a way.