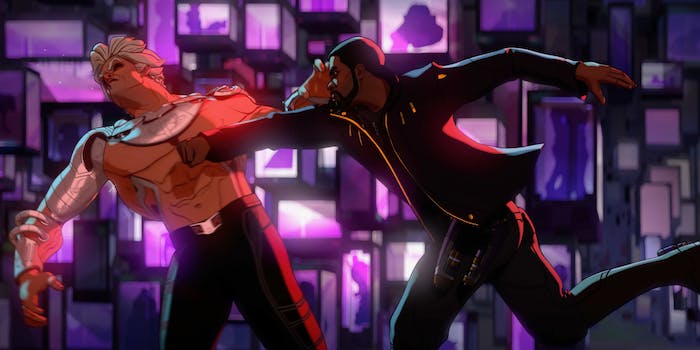 Recap: Chadwick Boseman voices T’Challa in episode 2 of Marvel’s ‘What If’

Combining 'Black Panther' with 'Guardians of the Galaxy,' this episode is a comedic space heist.

What If‘s second episode is its most hotly anticipated, starring Chadwick Boseman as T’Challa in his final MCU role. Like last week’s Peggy Carter episode, this is another story based on a familiar MCU movie: Guardians of the Galaxy, with T’Challa replacing Chris Pratt’s Peter Quill in the Star-Lord role. As a young child, T’Challa ventures beyond Wakanda’s border and is abducted by the alien Yondu Udonta and his crew. Instead of becoming the Black Panther, he grows up to be a kind of spacefaring Robin Hood.

The whole point of What If is to explore how a small decision could change the Marvel timeline, and there’s an immediate contrast between these first two episodes. Peggy Carter and Steve Rogers are relatively similar people, so Captain America’s origin story doesn’t change much with Peggy in the lead role. T’Challa, on the other hand, is very different from Peter Quill, in a way that raises some interesting questions about nature and nurture.

Guardians of the Galaxy depicts Peter as a frivolous man-child, obsessed with 1980s American pop culture and molded by Yondu’s morally dubious tutelage. Meanwhile, T’Challa is a Wakandan prince, raised with a strong sense of personal responsibility. This episode takes T’Challa’s iconic image and runs with it, introducing him as a dashing hero who is beloved by everyone he meets. He singlehandedly transformed Yondu’s grimy criminal squad into a team of folk heroes and personally persuaded Thanos to abandon his career as a supervillain. The affectionate joke here is that T’Challa is simply that good.

Co-starring Nebula (Karen Gillan) and a handful of other Guardians characters, the main plot is a space heist with The Collector (Benicio del Toro) as the target—an even campier figure than his live-action role. This idea pushes further at What If‘s flexible format, getting viewers used to the comedic tone by turning Thanos into a punchline. After years of Marvel marketing Thanos with a sense of reverent awe, this episode cracks jokes about the nonsensical nature of his plan for intergalactic genocide. With only 30 minutes to wrap up the story, viewers must be reminded not to take things too seriously—a strategy that works well for everything aside from T’Challa’s relationship with Yondu.

Wakanda is integral to T’Challa’s identity, so it’s hard to believe that he’d abandon his homeland if he had any way to return. The show solves this issue by revealing that Wakanda was destroyed shortly after T’Challa left Earth. But in the final act, we learn that Yondu made this up. Wakanda is fine, and T’Challa’s father has actually been searching for him for decades. So while the episode has an upbeat tone, the final scenes require a drastic emotional turnaround where T’Challa discovers this heartbreaking betrayal, and then (after returning to Wakanda to visit his birth parents) simply forgives Yondu. It’s a much darker scenario than Peter Quill’s origin story, where Yondu abducted Peter in order to protect him.

Here, Yondu’s choices are more overtly cruel. He tells T’Challa that his entire culture has been wiped out, turning this into a story about a child who is stolen from a loving family for no good reason. His separation from Wakanda feels more painful than Peter Quill’s abduction from America, because in some ways Wakanda feels more “real” within the MCU, a location with a specific emotional meaning. It’s certainly effective when Black Panther‘s distinctive, percussive music appears on the What If weight; one of the most impactful musical motifs in the franchise.

As I said in my initial review of the show, What If is quick, disposable entertainment. We shouldn’t take it as seriously as the movies. However, there’s a difference between suspension of disbelief and something like this Yondu/T’Challa issue, which is simply a misfire in terms of emotional storytelling. Aside from that though, it’s a very watchable episode—a funny, unexpected kind of team-up that plays around with the heist genre, bringing some beloved characters out of their narrative comfort zone.