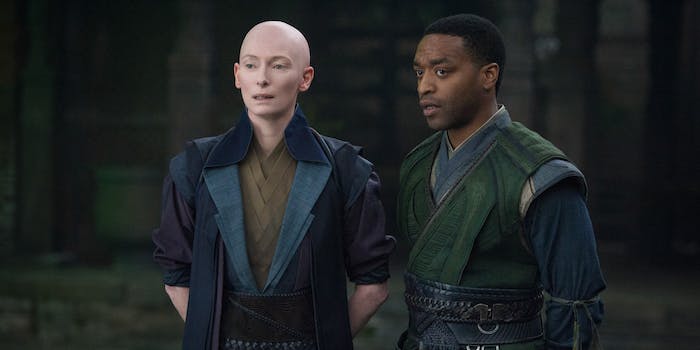 Swinton's role was criticized for whitewashing.

Casting Tilda Swinton as the Ancient One in Doctor Strange was one of the most controversial decisions in the MCU. Originally depicted as an Asian man in the comics, Swinton’s character was widely criticized as an example of Hollywood whitewashing. Now, MCU producer Kevin Feige admits that this was indeed a bad idea.

Feige originally argued that casting Swinton was a way to avoid racist stereotypes in the original text. He believed that if Marvel cast an elderly Asian man as the Ancient One, Doctor Strange’s mentor, then the studio would contribute to harmful stereotypes in Western media. Likewise, he thought that casting an Asian woman would, in his words, fall foul of the “Dragon Lady” trope.

In a new interview with Men’s Health, Feige admitted that casting a white woman as the Ancient One was the wrong choice. “We thought we were being so smart, and so cutting-edge,” he said.

This echoes what critics said back in 2015 when Swinton was first cast, and in 2016 when Doctor Strange came out. Swinton also had a small but important role in 2019’s Avengers: Endgame.

Back in 2015, Feige believed that casting a white actress meant Marvel could avoid racist clichés altogether. This turned out to be a major error of judgement, because it led to Marvel whitewashing the character. In Doctor Strange, the hero is a white man who travels to the city of Kamar-Taj (implicitly in Tibet), where he learns a magical martial art from the Ancient One. She wears a costume with clear East Asian influences, and her role echoes familiar tropes in Chinese martial arts films. As a result, Doctor Strange‘s three lead roles are played by white people (Cumberbatch, Swinton, and Mads Mikkelsen) while the only Asian main character is Doctor Strange’s sidekick, played by Benedict Wong. Marvel’s Iron Fist was criticized for similar reasons.

Six years after hiring Swinton, Feige understands that there could have been ways to cast an Asian actor instead. This comment arrives as Marvel begins to ramp up publicity for Shang-Chi and the Legend of the Ten Rings. Feige positions the Ancient One as an unfortunate element of the MCU’s past, while Shang-Chi, a martial arts film with a majority-Asian cast, represents the franchise’s future. From this, we can assume that Swinton won’t return for the Doctor Strange sequel.