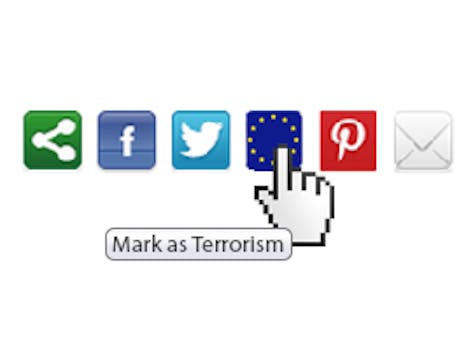 The E.U.'s Clean IT project has released a report suggesting terrorism on the Internet would decline if users could report it like spam.

Admittedly, the European Union’s Clean IT project is tasked with a herculean goal: Reduce terrorist use of the Internet.

Still, there are probably better solutions than “let’s make it easy for users to mark a post as terrorism, the way they already can mark content as spam.”

That’s a central recommendation of the project’s new report, released in anticipation of its conference finale Wednesday. As noted by moderator (and Ars Technica editor) Cyrus Farivar, the report is the culmination of two years’ work and €400,000 ($428,000) in E.U. funding.

So the Clean IT project offers several ideas for users to click “mark as terrorism”: either embed it as a clickable option in social media sites, or make it a general feature of Web browsers.

The report doesn’t mention the dark side of existing “mark as spam” mechanisms, which would likely also apply to a terrorism button: They make it extremely easy to falsely accuse innocent people. And if users would really be able to report purported terrorism anonymously, as the report recommends, false-flaggers would face no consequences.

The entire report, it should be noted, is a recommendation, and isn’t binding. A number of experts told Farivar that it was severely flawed, that Clean IT doesn’t “have a clue how to battle [terrorism],” and it is difficult to imagine a more expensive, less useful document.”

Emblematic of that sentiment is the Clean IT project’s Twitter account. Sparsely updated, it only has 17 followers, and its avatar is a badly cropped image that simply reads “The Cle / Reducing the impact.”