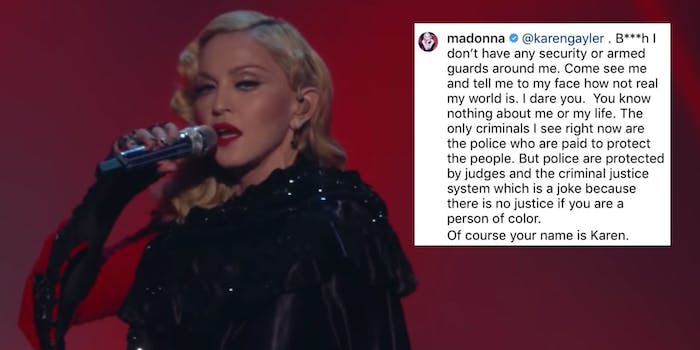 ‘Of course your name is Karen’: Madonna shuts down a literal ‘Karen’ for criticizing her Instagram on Daunte Wright

'Come see me and tell me to my face.'

Pop music icon Madonna shut down an actual Karen on Tuesday for criticizing her remarks about the shooting of Daunte Wright.

In a post on Instagram, the singer shared the graphic bodycam footage of Wright’s final moment on Sunday after being struck by police gunfire.

Madonna went on to discuss the details surrounding the case, such as claims from police that the officer involved had inadvertently fired her gun instead of a taser.

“This is so infuriating and unacceptable,” she wrote above a hashtag calling for gun control. “God Bless Daunte and his family.”

“I would bet you have people with guns to protect you and your family. But the little people can be left unarmed,” @karengayler wrote. “If you take the guns away criminals will ALWAYS find weapons. The rest of us innocent people will be victims.”

The woman went on to accuse Madonna of not living “in the real world” and hiding “behind walls with protection.”

Likely to the shock of the Karen, Madonna responded. The singer first denied having any armed guards at all.

“B*tch I don’t have any security or armed guards around me. Come see me and tell me to my face how not real my world is,” Madonna said. “I dare you. You know nothing about me or my life.”

The pop star went on to argue that it was instead the police and judges who were acting like criminals.

“The only criminals I see right now are the police who are paid to protect the people,” she added. “But police are protected by the judges and the criminal justice system which is a joke because there is no justice if you are a person of color.”

“Of course your name is Karen,” she added.

The interaction has since gone viral online, with many of the singer’s supporters applauding her remarks.

The officer who fired the fatal shot at Wright, Kim Potter, has since resigned.