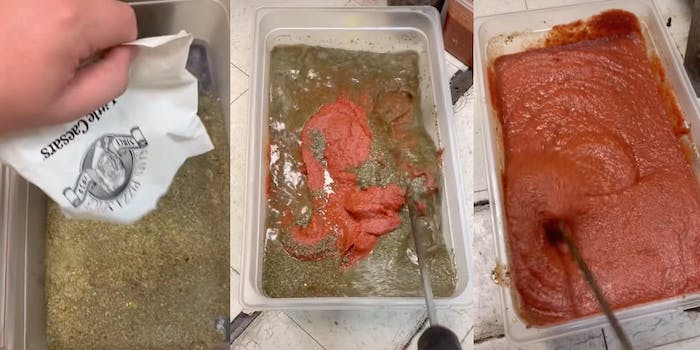 One viewer even notified the health department, and the worker was allegedly ultimately fired.

TikTok has made a trend of “exposing” the process behind favorite fast food items. Employees at Taco Bell, Panera Bread, Chick-fil-A, and Dunkin’ have lifted the veil on a number of menu favorites, including Taco Bell’s beans and Panera’s mac and cheese. Little Caesars is the latest fast-food staple to get the TikTok treatment after an apparent employee exposed the process behind the chain’s pizza sauce.

TikToker @tye_pearson, who simply goes by T.Y.E on the platform, uploaded their simple reveal video on June 25. In the four days since it went up, the video has earned 4.3 million views and more than 420,000 likes.

The video is straightforward. It shows the ingredients for the Little Caesars sauce already loaded into a simple clear tub as an employee, presumably T.Y.E, mixes the contents together. The initial mixture is admittedly less than appealing, as what appears to be tomato paste, Italian seasoning, and water float around in the tub together. The tub is set up on the ground for the entire process. Once the ingredients are combined, however, the video reveals a well-blended and tasty looking sauce.

T.Y.E apparently picked up on what made the video so popular, because he followed it with several similar reveals. His subsequent videos walk viewers through the process of making dough and Crazy Bread and even returning to the sauce prep to show a bit more of the process. The odd greenish-grey substance in the water is, in fact, spices, which come pre-mixed in a hand-sized package. The whole pack is added to the water and tomato sauce, before being blended in with a drill-powered whisk.

Viewers were stunned to get a behind-the-scenes look at the process. Commenters were split on whether the somewhat less-than-appetizing process was a deal-breaker, with many noting that “it still be bussin tho.”

Other commenters posed some very valid questions, like: “Why is it on the floor? … Why is the water GREEN? … What in the god damn.”

Another even notified the health department.

Most people acknowledged that the process behind making the sauce was pretty expected. It may not look overly appealing at first, but once the ingredients are combined, the sauce looks to be pretty tasty. And, as noted by several commenters, at least Little Caesars doesn’t use a pre-packaged sauce, like many fast-food pizza places likely do.

T.Y.E’s foray into behind-the-scenes videos appears to end on a sour note. After five videos—uploaded over a series of two days—it appears T.Y.E was fired from their job. A final Little Caesars video sees the (former) employee heaping their Little Caesars uniform on the ground outside before drenching it in lighter fluid. Once lit, the pile of cloth goes up in hearty flames. A simple middle finger tossed up by T.Y.E, along with a caption telling viewers to “get fired and get f*cked up,” polished off the video.

A number of commenters were relieved to see T.Y.E out of a job, remarking on their practice of preparing sauce on the ground. Others—likely viewers who’ve seen numerous employees lose their jobs over viral exposing videos—were more sympathetic.

T.Y.E, for their part, seems unconcerned. In responses to comments, the former Little Caesars employee seems pleased to have cut ties with the pizza chain, noting that they felt “over wolfed and under paid” as an employee.

Hopefully their next gig is more fulfilling.

The Daily Dot has reached out to T.Y.E. and Little Caesars.