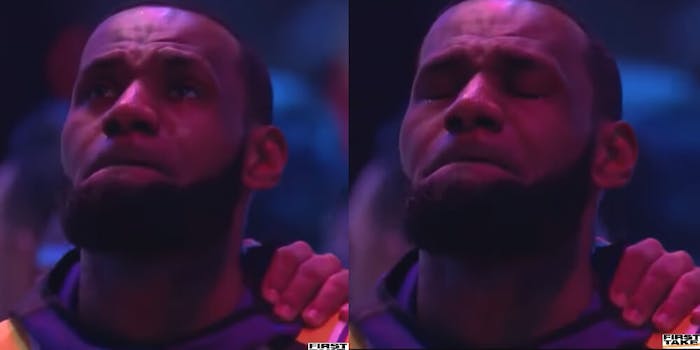 While many agreed to never use the photos as a meme, some still did.

Twitter users seemed to be in a collective agreement that pictures of LeBron James crying over Kobe Bryant’s death wouldn’t be used as a meme–ever. Yet, some still decided to meme the grief-stricken moment.

But doing so may just get you reported by fans on the platform.

On Jan. 26, Bryant, along with his daughter Gianna and seven others, died in a helicopter crash. James mourned the death of his former Team USA teammate and friend at a Lakers pregame ceremony dedicated to honoring Bryant’s life and legacy. (Bryant played for the Lakers his entire professional career.)

“Laker nation, man, I will be selling you short if I read off this shit, so I’m going to go straight from the heart,” James said at the ceremony.

It was at the ceremony that James broke down in tears. Many users tweeted out some variation of an agreement to not meme the photos.

“Can we make a pact as a family to NEVER allow these pics to become memes?” one user wrote in a now-viral tweet.

Yet, some Twitter users began using the photos as a reaction meme to convey everything, from a crush breaking their heart to finding out about Megan Thes Stallion and G-Eazy’s rendezvous.

When you find out Meg The Stallion is dating G Eazy: pic.twitter.com/67WkixNE6m

You can't say you respect kobe if you're going to try to meme this sincere moment from Lebron. SMH….the internet…

Anything Kobe related is off limits

Many even started to respond to the users who urged against using the meme with the meme.

“When you realise this is the internet and telling people not to do something is only going to make them want to do it even more,” Twitter user @6ikoV posted, along with the meme.

When you try to be funny but realize you missed the joke pic.twitter.com/oYLFiaFrdi

Now, fans are fighting back by reporting any user who memes the photos.

“Everytime someone makes a meme of that pic report it,” Twitter user @Damaged_Minds05 urged.

Another wrote that they report it as “abusive or harmful” content.

“I will report y’all using that photo of Lebron as a meme. Idcidcidc,” Twitter user @stcyannee cautioned.

Reporting as abusive or harmful

Everytime someone makes a meme of that pic report it

I will report y’all using that photo of Lebron as a meme. Idcidcidc

instead of quote tweeting that meme pic of Lebron at Kobe’s tribute, just report it ….