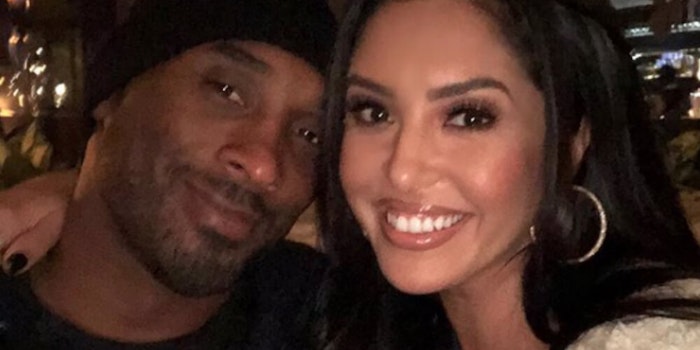 The account thanked fans for their prayers before being removed.

A Twitter account that claimed to belong to Vanessa Bryant, the wife of late basketball legend Kobe Bryant, was suspended on Wednesday.

The account, which had nearly 50,000 followers prior to its suspension, sent out numerous tweets in an effort to convince users that it was actually run by the former NBA star’s wife.

“Enjoy every second next to your loved ones, because you never know when they will leave this world,” one tweet from the account said. “Share my message. Thank you all for the support you give us.”

The bio for the page also made references to Bryant and the couple’s daughter Gigi, who tragically died alongside her father in a helicopter crash on Jan. 26.

“I love you and miss you Kobe and Gigi,” the page’s bio read. “You will always be my strength”

While many users appeared to be fooled, others were quick to call out the account.

Of all the rotten, despicable things–to set up a FAKE Vanessa Bryant twitter account?? Sometimes, most of the time, I hate social media so much. People will stoop to unbelievable lows if they think they can remain anonymous with no accountability.

The things people do for fame and clout. Sad people in this world!

The Daily Dot reached out to Twitter for comment on the suspension but did not hear back by publication time.

Under Twitter’s rules and guidelines, impersonation has long been forbidden on the platform.

“Impersonation is a violation of the Twitter Rules,” the company’s website states. “Twitter accounts that pose as another person, brand, or organization in a confusing or deceptive manner may be permanently suspended under Twitter’s impersonation policy.”